Downhill Fast – Only Just Catching Up With Kevin Reimer

TSG caught up with downhill skateboarder Kevin Reimer to find out how he’s getting on, what plans he has for the future and milk him for some top tips on how to point it like a pro.

TSG downhill skater Kevin Reimer has made a career of going downhill fast and has a closet full of awards to prove it, including two World Championship crowns. But in 2019, while out on the hills in his adopted home of California a freak accident led to a severed ACL and meniscus and a year on the sidelines.

As he nears the end of the road to full recovery TSG caught up with him to find out how he’s getting on, what plans he has for the future and milk him for some top tips on how to point it like a pro. 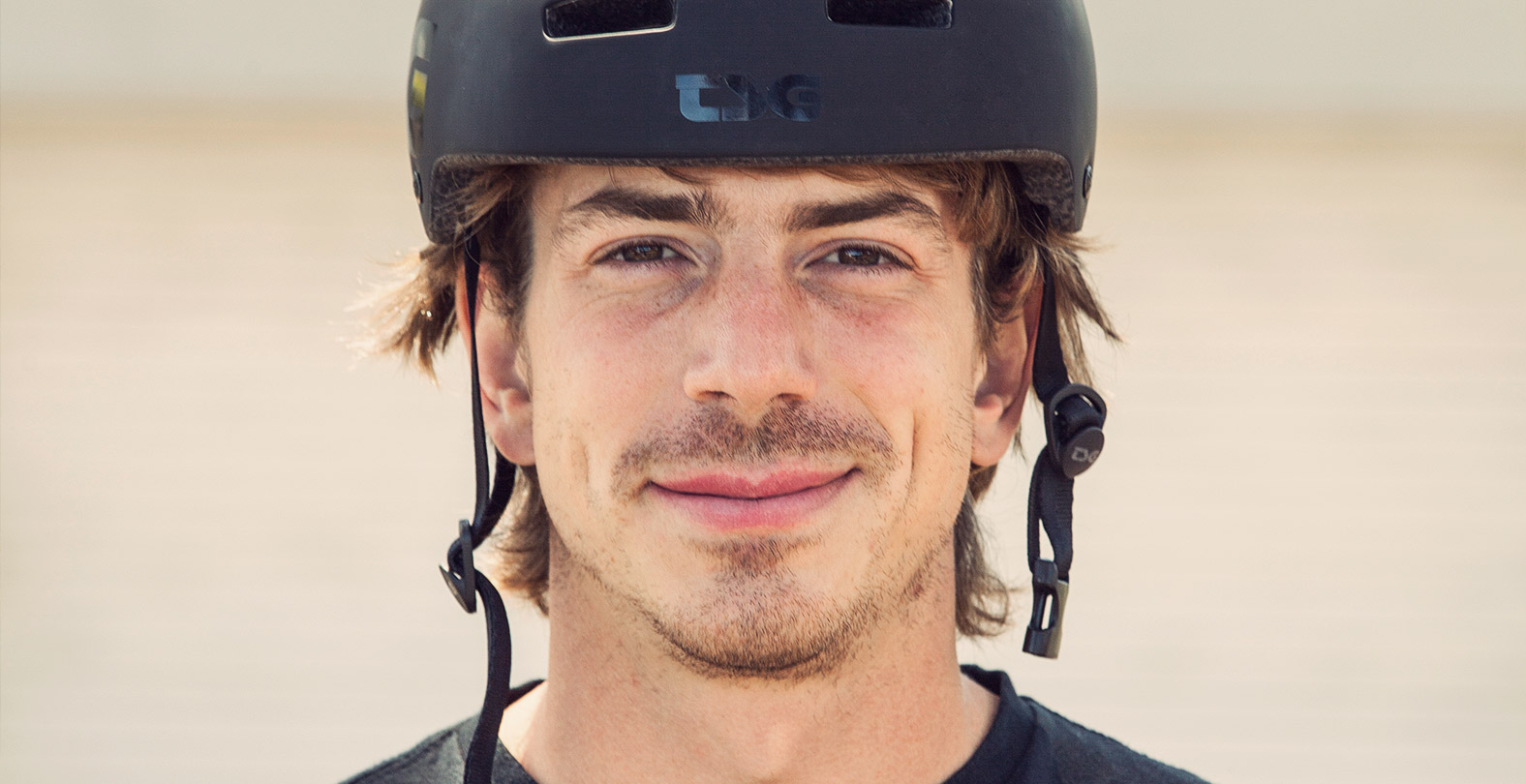 Downhill skating is a crazy discipline of board riding and the consequences of slamming at speed are pretty big?

Downhill skating is indeed a wild discipline or niche of skateboarding, but in some ways it’s actually safer than street or bowl skating. It’s a two-dimensional form of skateboarding largely without airtime (unless you make a mistake anyhow) and thus it is rare to have direct impact into the ground. On the other hand road rash is ultra common and it can be extensive.

What TSG gear do you use to minimise your chance of injury?

When I’m out skating on the hills there are some crucial pieces of gear that I simply will not skate without. Number one is my TSG Kraken helmet – it’s comfortable, it fits my big head, and I’ve now cracked two EPS liners and suffered no consequences. The next is the only kneepad designed for downhill skating, which is the TSG DHP. The wrap-around puck protects the side of the calf when you fall; a common place to crash especially while learning. The next thing is TSG Crash Shorts, which are a recent addition to my safety gear collection and I’m never going back to skating without. It has been awesome to take a hip fall and have no bruising or road rash.

When I am going for top speed, racing, or skating over 50mph I opt to use the TSG PASS helmet, which is by far the best full face as well as being the safest on the market.

In this video Kevin explains you the Kneepad Sk8 DHP’s:

Can you tell us about your most recent slam and the consequences?

My most recent slam was extremely unexpected and quite honestly a total freak accident. I was casually skating down a canyon in Malibu with a group of other riders and coming to a stop at a common meeting place. I looked behind me and the nearest skater was pretty far behind me, I put up my hand to signal I was going to stop and then WHAM, the skater behind me crashed into my leg as I jumped off my board. It was clear something was wrong immediately and I couldn’t get up or feel stable on it. I was pretty sure it was my ACL being torn, and I wasn’t wrong. It ended up a fully torn ACL ligament and torn meniscus.

Taking the curve in full perfection.

What has been your journey of recovery?

The recovery journey for an ACL is long and arduous, and slowed down even more by having a meniscus tear. My surgery was on October 9th and today, April 14th, I still don’t feel confident doing everything. It is the type of recovery that generally takes a whole year so I’m patient. I started off with 6 weeks of pre-hab to get my flexibility back and strengthen it up and I think it was worth the effort. Now I’m going to physio two to three times a week and hitting the gym while also working hard in the garden, which has been great for me.

What are your plans for when you’re back on board and downhilling?

Getting back to skateboarding is high on my priority list, but I am not trying to rush it. COVID gave me an optimal window to recover and not really miss out on too much of life or skating since no one was really piling into cars or holding events. My goal is to get back to freeride skating and being a part of the community. I haven’t felt the urge to race and feel that if you’re not on the track to really push it, it’s not the best venue for downhill skaters. There are so many quality freeride events and other ways for me to be present and I’m hungry to be back out there again but in a lighter weight role and without being so attached to the racing scene. 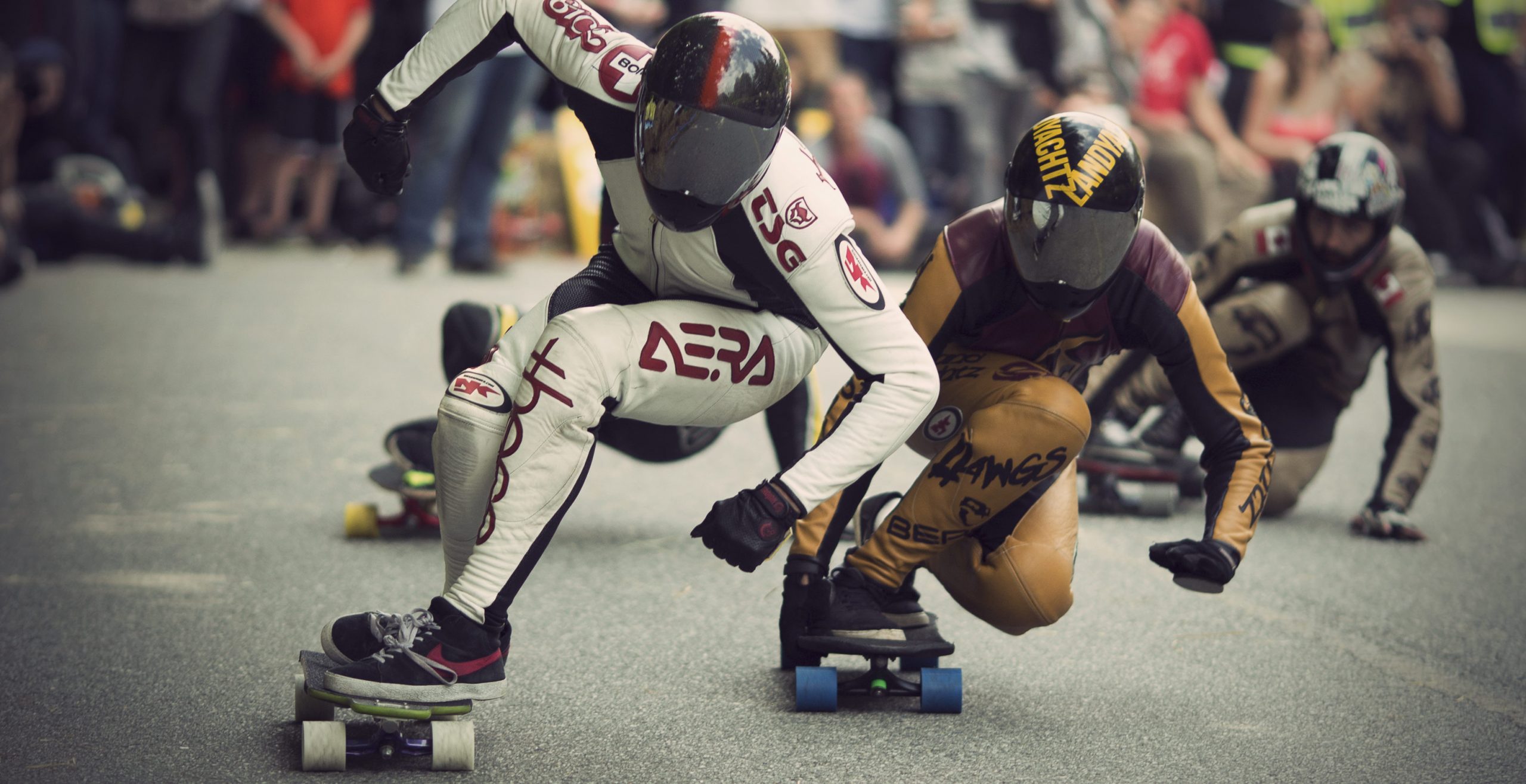 old one from a downhill race back in the days.

Can you give some advice to kids who are thinking about getting into downhill?

Downhill skateboarding involves speed and any time there is speed, there is danger. The number one thing for kids who are getting into it is, LEARN TO BRAKE BEFORE YOU GO DOWN HILL! A fast rolling skateboard on any hill will get up to speed easily and you need to be able to stop. When I was 14, there wasn’t any information online and I couldn’t find videos that explained how to stop and I ended up getting hit by a car and breaking my wrist. Now there are so many videos, tutorials and stuff. Do your reading and video watching and get the essentials down before hitting the hills. And DON’T FORGET YOUR HELMET!

What are the essentials that they will need for starting out?

Luckily downhill skating doesn’t require much. A longboard with soft wheels (or street skate with hard wheels also works for learning); gloves with a puck; a helmet; and any level of pads you’re comfortable with wearing. I recommend kneepads and elbow pads if you don’t have much skating experience.

Watch why Kevin Reimer rides with the TSG Kraken Helmet:

What video projects are you working on?

Lately due to my knee I haven’t been able to walk around while carrying camera gear and haven’t wanted to risk dropping it or tripping. I’m starting to get strong enough to feel comfortable getting out and about with my gear and plan to film a video showing off the TSG PASS and its features as well as some How To videos for Powell-Peralta. People are stocked on using our Snake wheel to learn, so it’s time to offer some new material.

You have been instrumental in the progression of downhill trucks, decks and wheels – What are you working on at the minute?

We’re about to release a brand new ultra premium soft wheel formula that is like nothing else I’ve ridden, it’s called Powell-Peralta Dragonskin. On the other side of things I’ve been working on re-releasing some of Aera Trucks‘ most favourite models and we did a 10-year anniversary re-run of the Aera K3. I’m planning to get an order in for more K4 trucks and will get the new P2 slalom style truck out as well. It’s an amazing year for product sales. 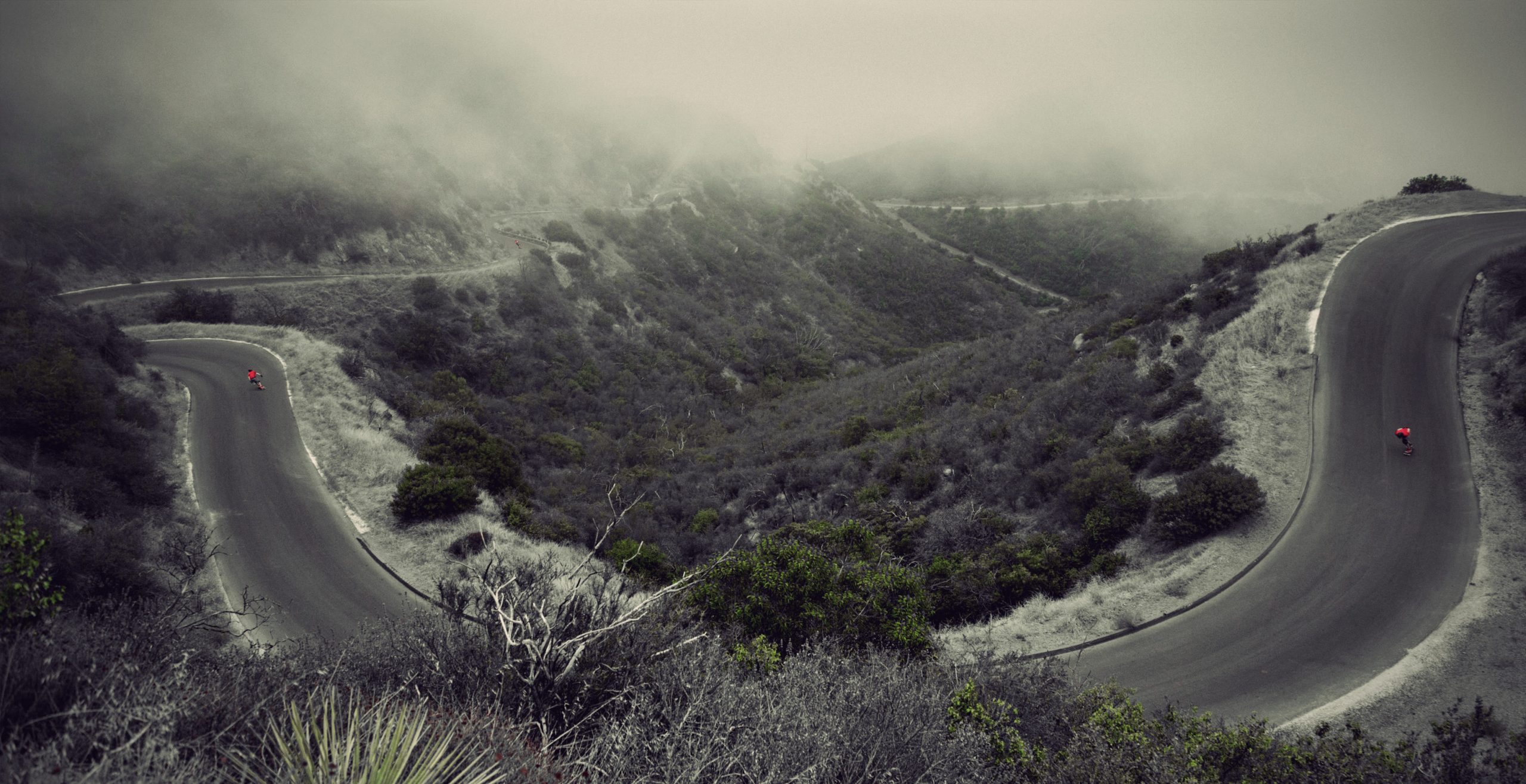 can you spot the skateboarder? Kevin rushing down in Santa Barbara, California.

What are your top 5 spots for downhilling that are a must hit up post lockdown?

I can’t name all the names specifically in the interest of protecting the spots but some of my most favourite areas to skate are: