Sam rides it ALL during his awesome road trip. He traveled for three weeks with his bike to discover iconic places, remote trails, and sick riding spots across Europe.

What do you do when you’re stuck on the British Isles in continuous rain? You’re getting creative! TSG’s Sam Pilgrim, the Master of crazy ideas, worked on an escape plan. This should take him on a journey through Europe, of course not without his bike. The result is: The Euro Loop.

Stuff packed, family and friends informed and off he goes to the ferry in Dover. With him filmer Joe Simkins and friend Tom Cardy who assisted.

Filming The Euro Loop was such an awesome experience, travelling all around Europe in search of cool riding spots and filming tricks in different locations made it special

After arriving in France, he went straight to Paris. then hopped from Paris to Finale Ligure to Milan up to Lake Como, crossing Switzerland into the Olympic Park in Munich and then heading back to France through Belgium.

So now follow Sam dirt jumping, dropping some freeride lines, ripping trails, riding some street spots and throwing in some trials moves too on his way through Europe finest truck stops and tourist attractions.

“Filming The Euro Loop was such an awesome experience, travelling all around Europe in search of cool riding spots and filming tricks in different locations made it special. At times it was quite challenging to find riding spots Be we made it work in the end and I’m super happy with the end result!!” states Sam.

This wheelie shot was in a french town called Tournus. They were making their way through france and decided to do a random stop here. Turned out to be a pretty cool looking location so they got out the cameras and made some shots

The next stop in France was a total contrast to this bright sunny french town before.  Sam arrived in Digne in the South of France. The mystic Terres Noires (Black Hills) was one of the main destinations of his trip.

The scenery was harsh and mountainous 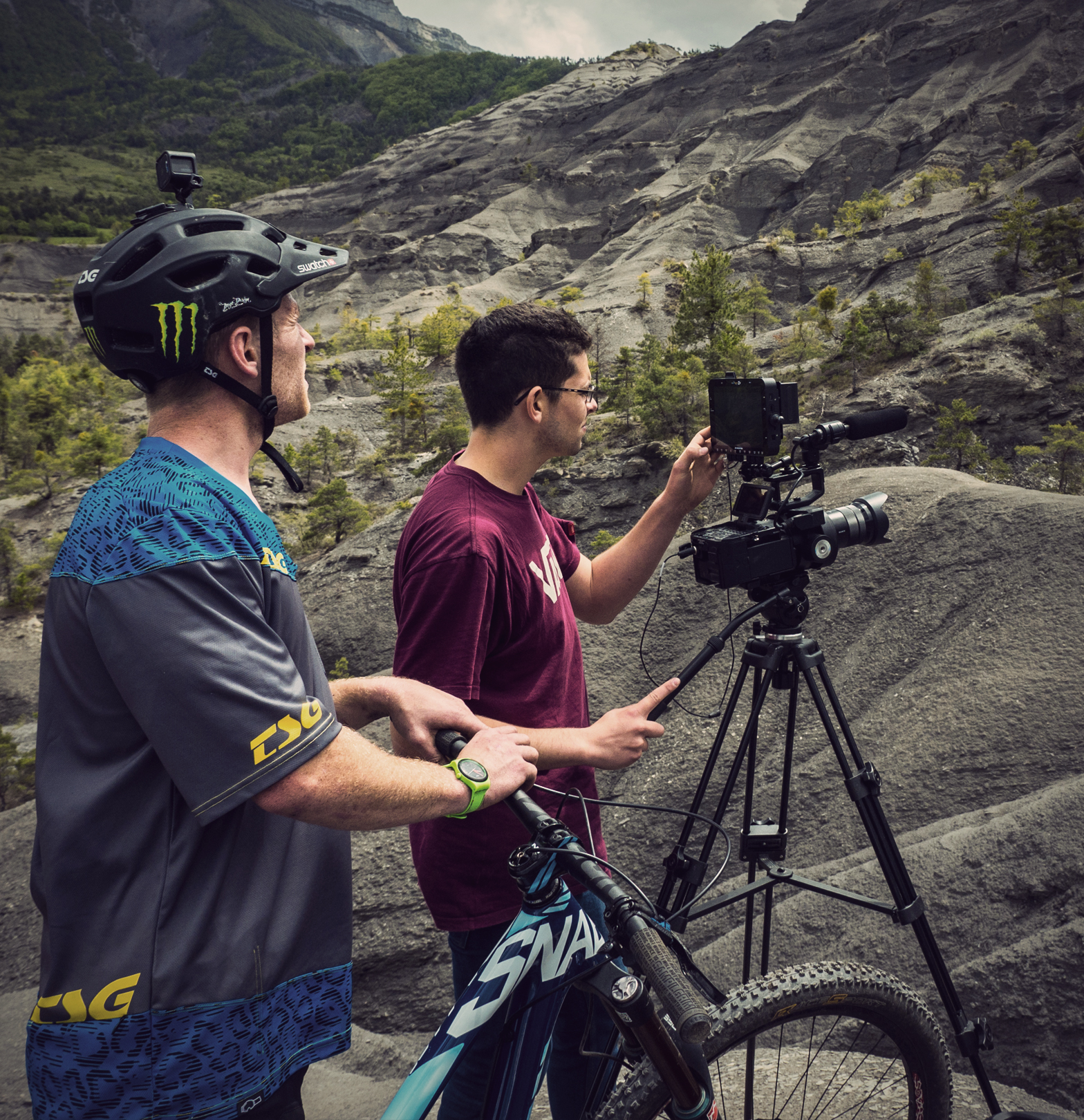 Checking which run to take next 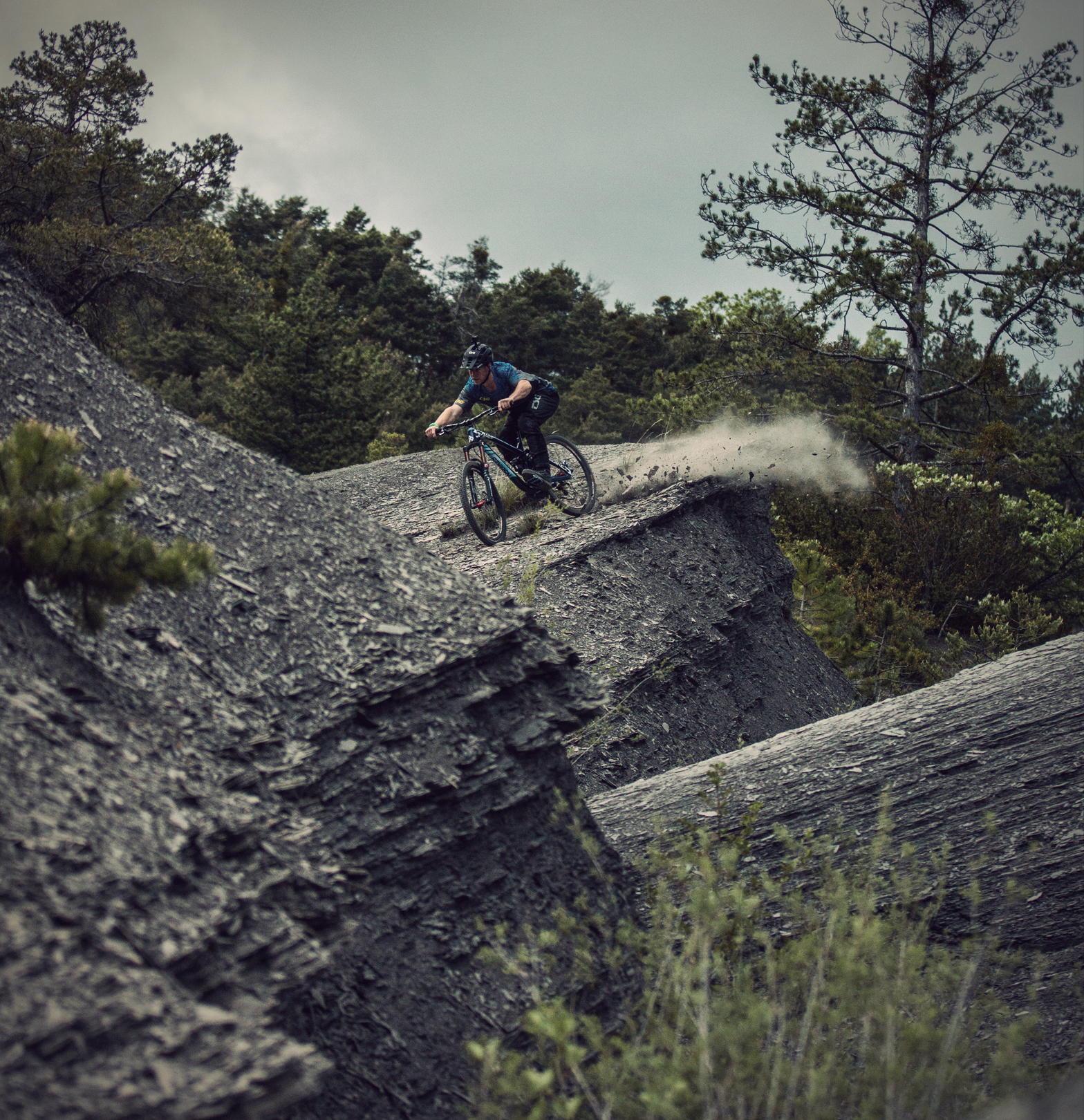 Next stop was Italy. They drove all the way down to Finale Laguna and on the way in towards the main town they saw this sick looking quarry. Luckily it was closed so they went in and found some really cool and unique things to ride.

Definitely one of the coolest finds of the trip! 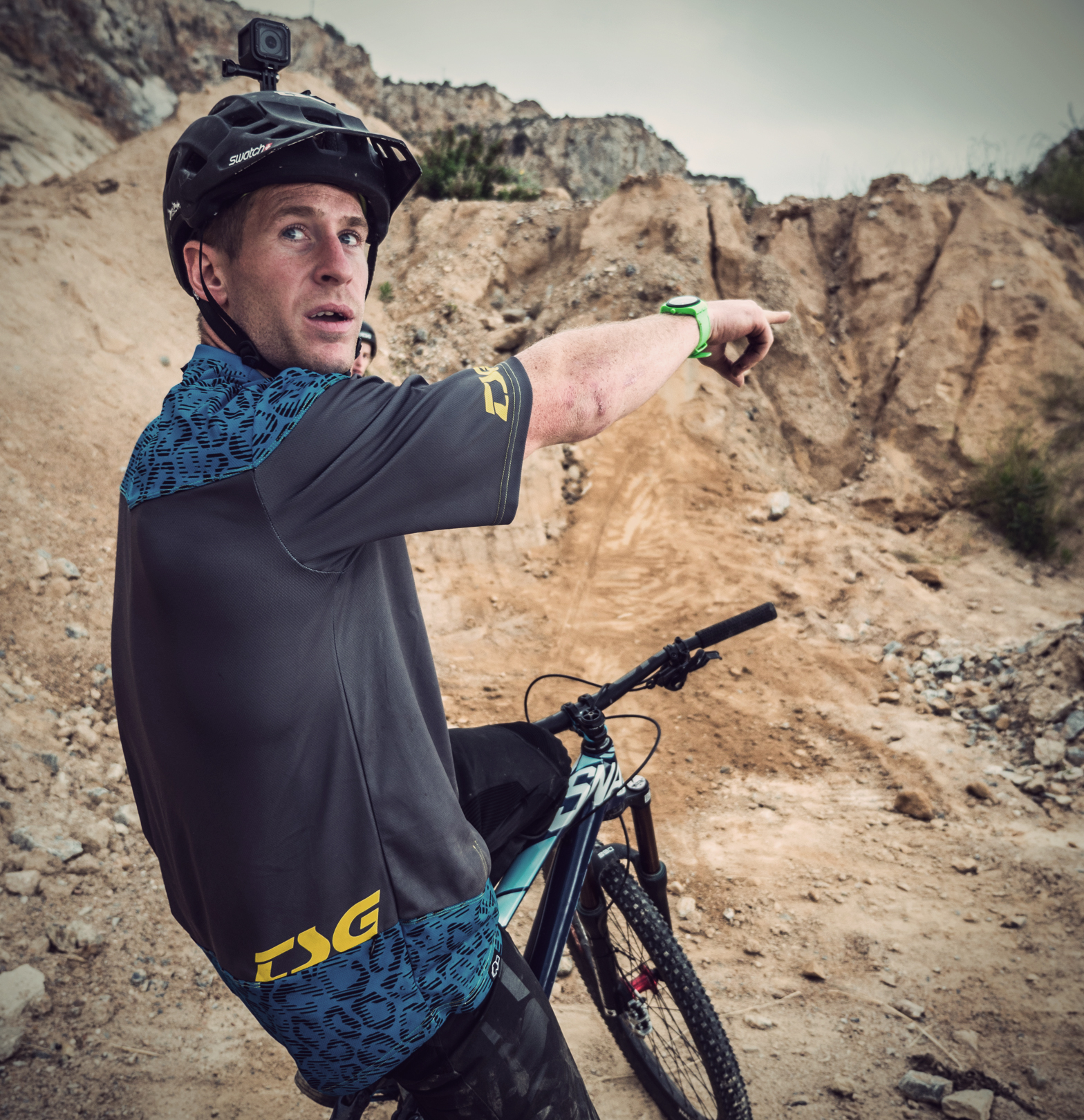 Sam barspinning in the quarry 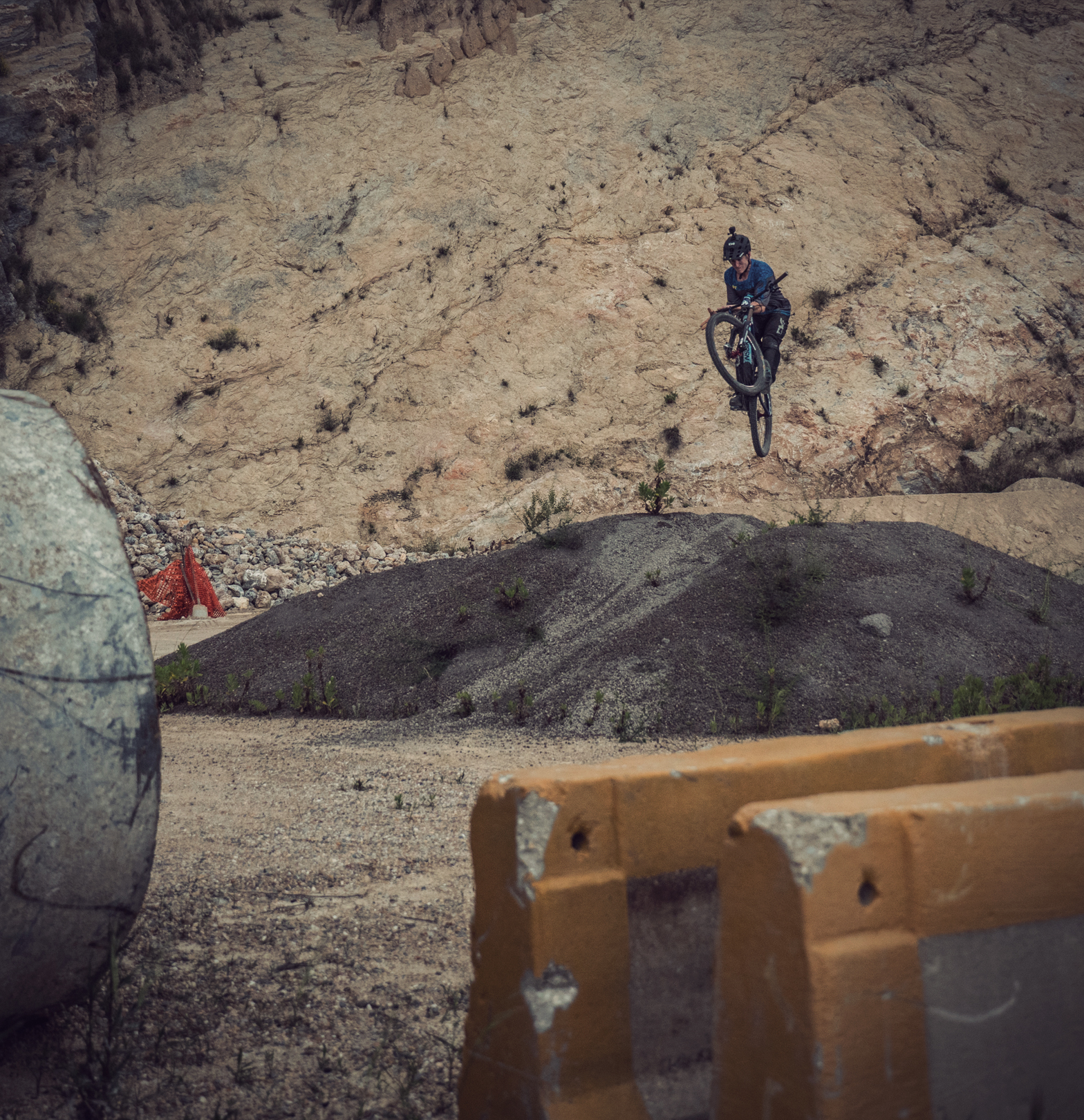 After finale they drove up north through Italy and decided to stop in Milano.

Posing in front of the Milan Cathedral 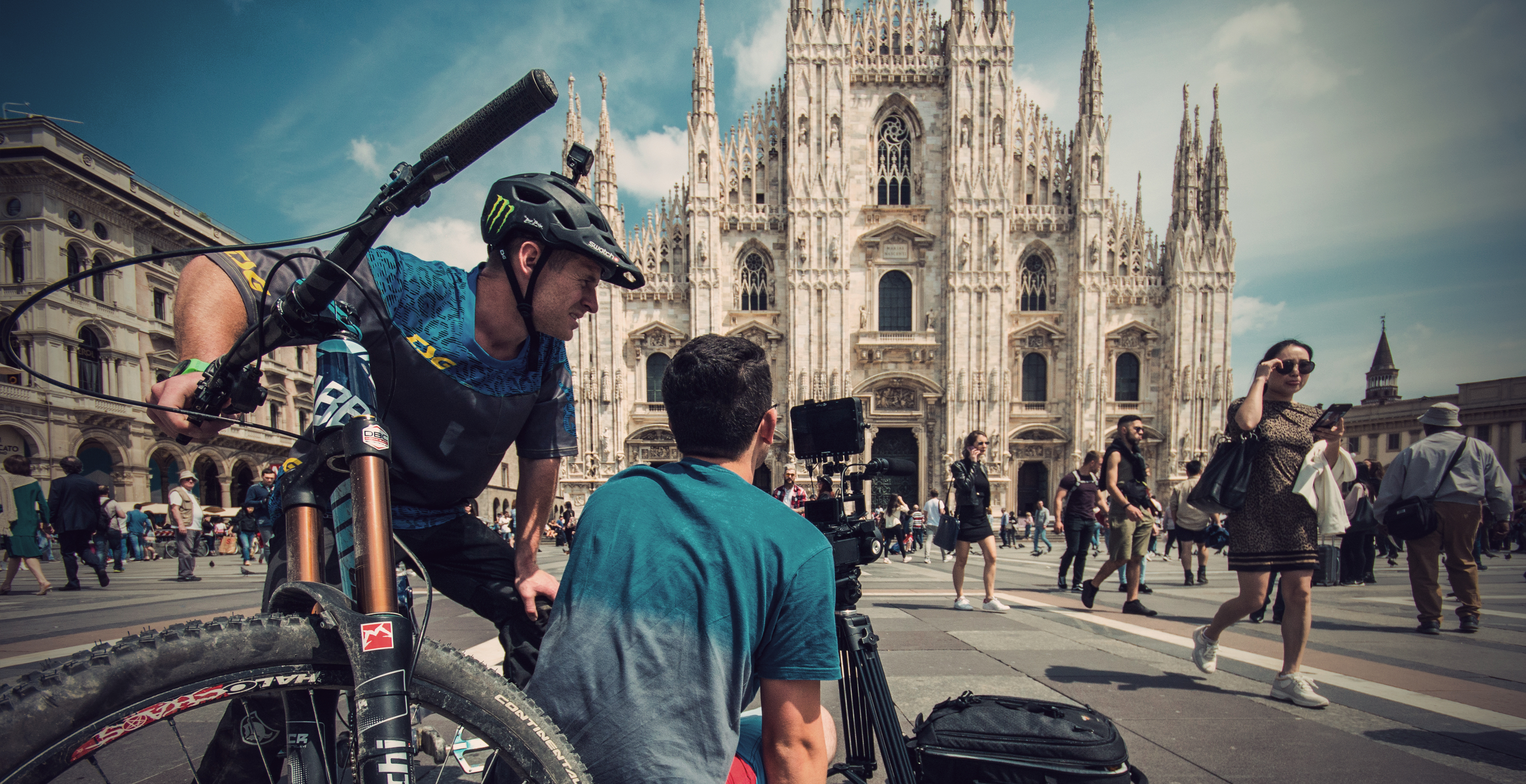 Not the typical Milano tourist!

From Milano it is only a 3-4 hour drive to Zurich, Switzerland. Sam stepped by our office for a short talk before meeting up with local biker and photographer Dominik Bosshard.  Dom showed him around some trails. In the video you can see Zurich in the background and they even had a close encounter with a train!!!

Riding some cool trails above Zurich

After Switzerland, Sam drove up to Bavaria’s capital Munich in Germany. He has been to Munich a lot and knew exactly where to go. The Olympic Park build for the XX. Olympic Summer Games back in 1972 offers tons of cool ridable features. Find them in the video at the end of this story.

Sam is pushing up the hill in the Olympic Park.

Leaving Munich up north to visit his TSG team mate Amir Kabbani turned out being one of his favourite parts of the trip. Amir definitely lives in paradise. The forest next to his hometown has not only awesome trails, but also excellent dirt jumps. 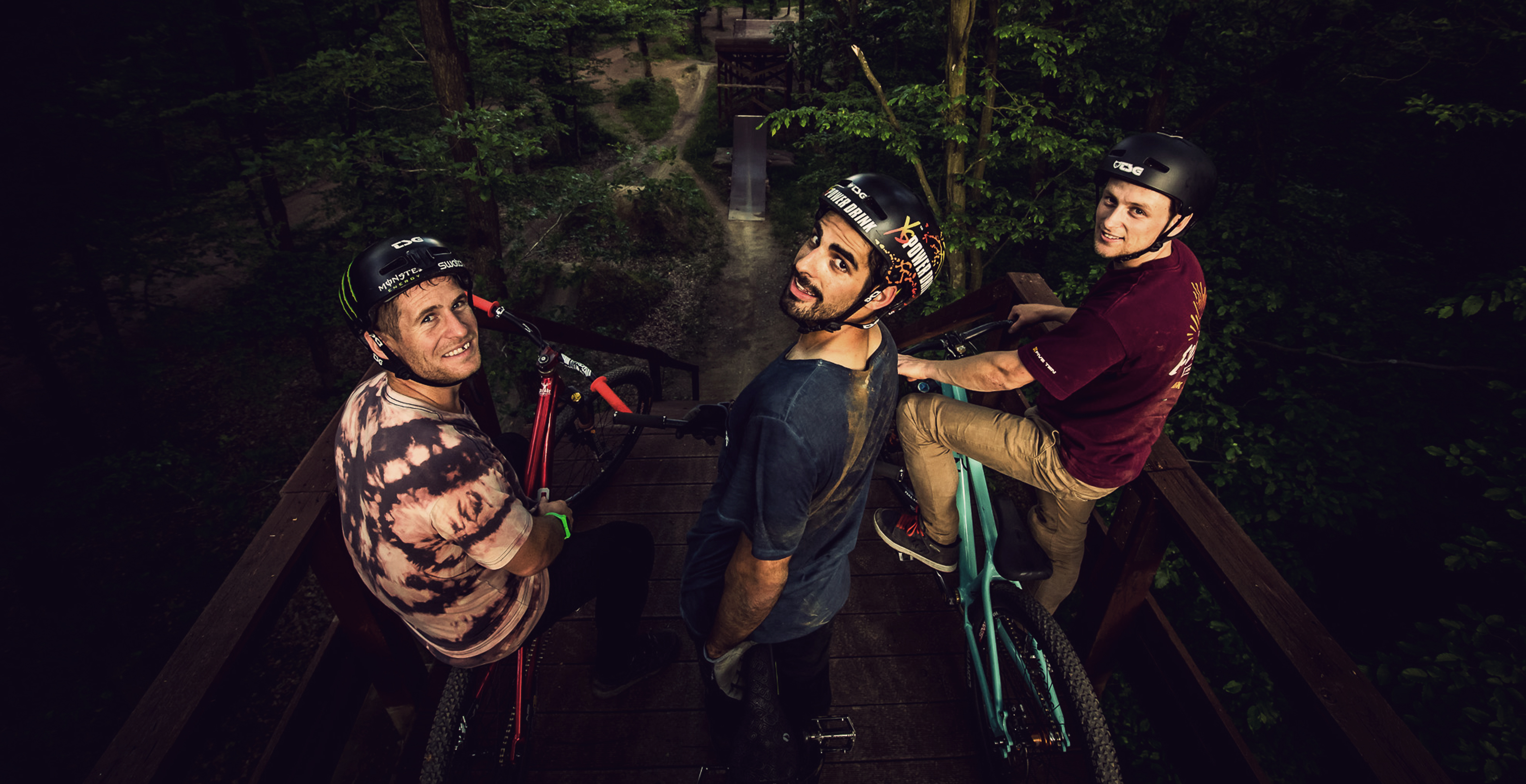 Nothing better than a session with friends 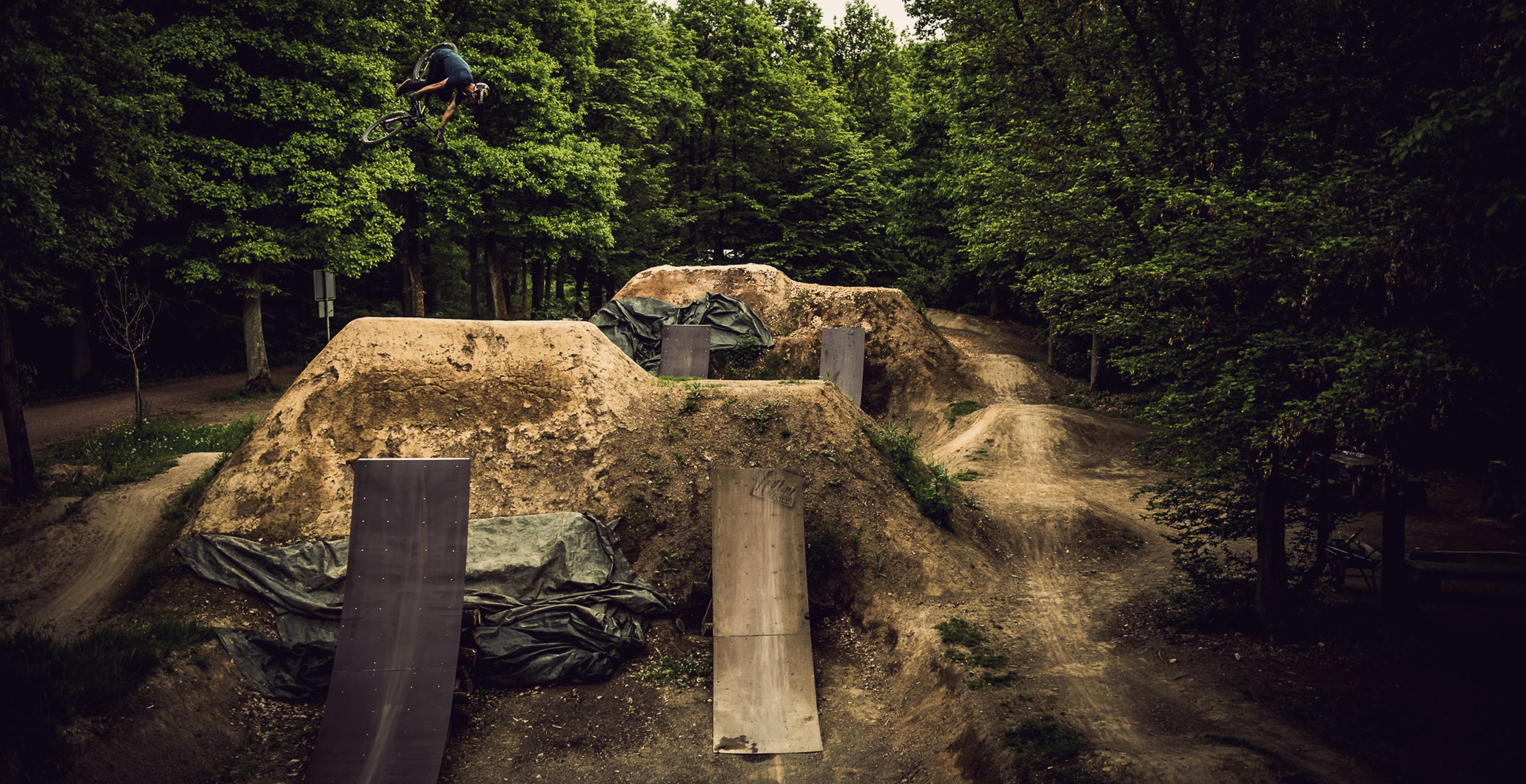 Amir is sending it in style! 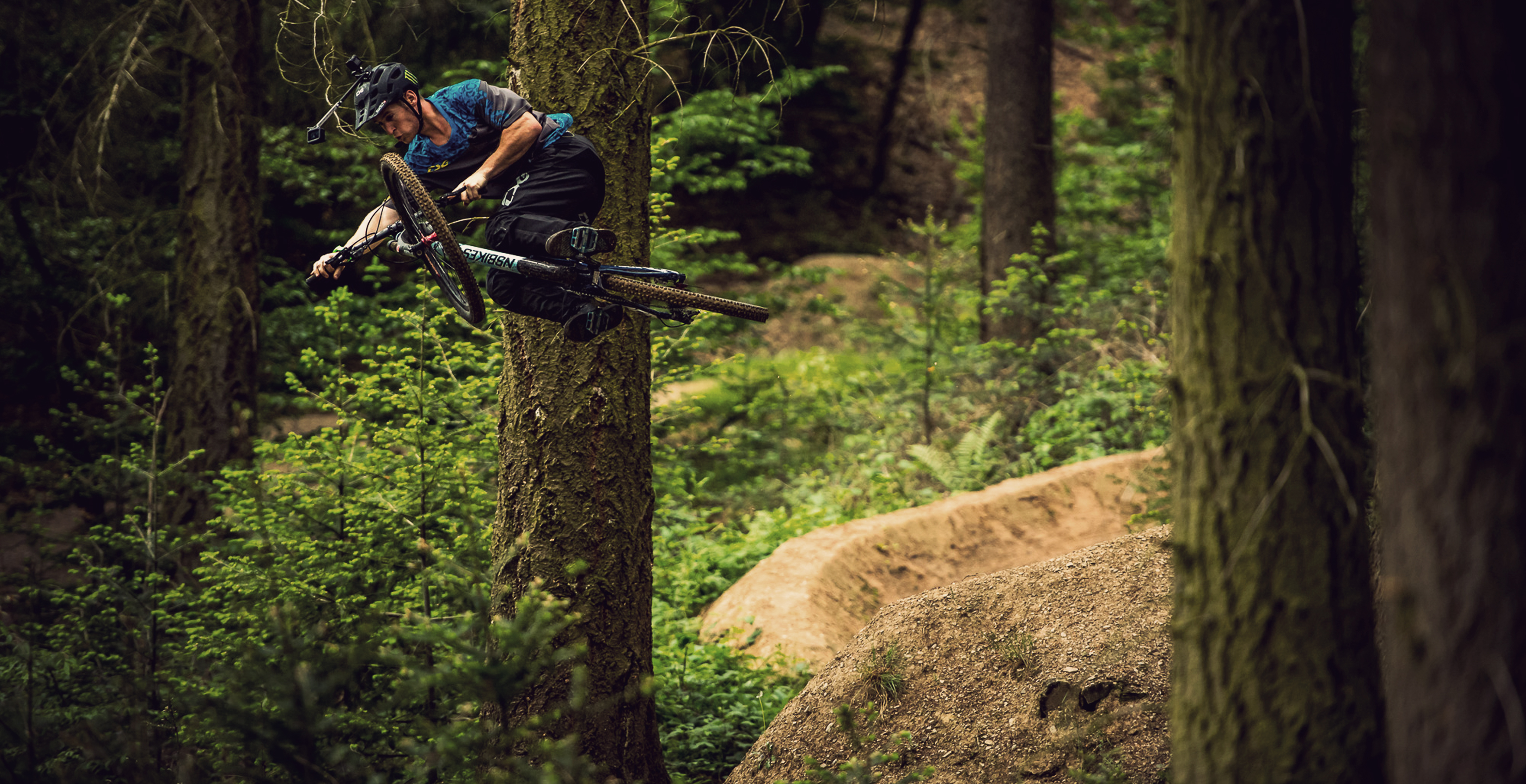 Hitting the trails in Amir’s wood

Its always fun to hang out with  Amir. Thanks for the ride mate!!

You need to pass Belgium to take the ferry back to England from France. By coincidence they found this cool spot so Sam jumped out for another great photo. 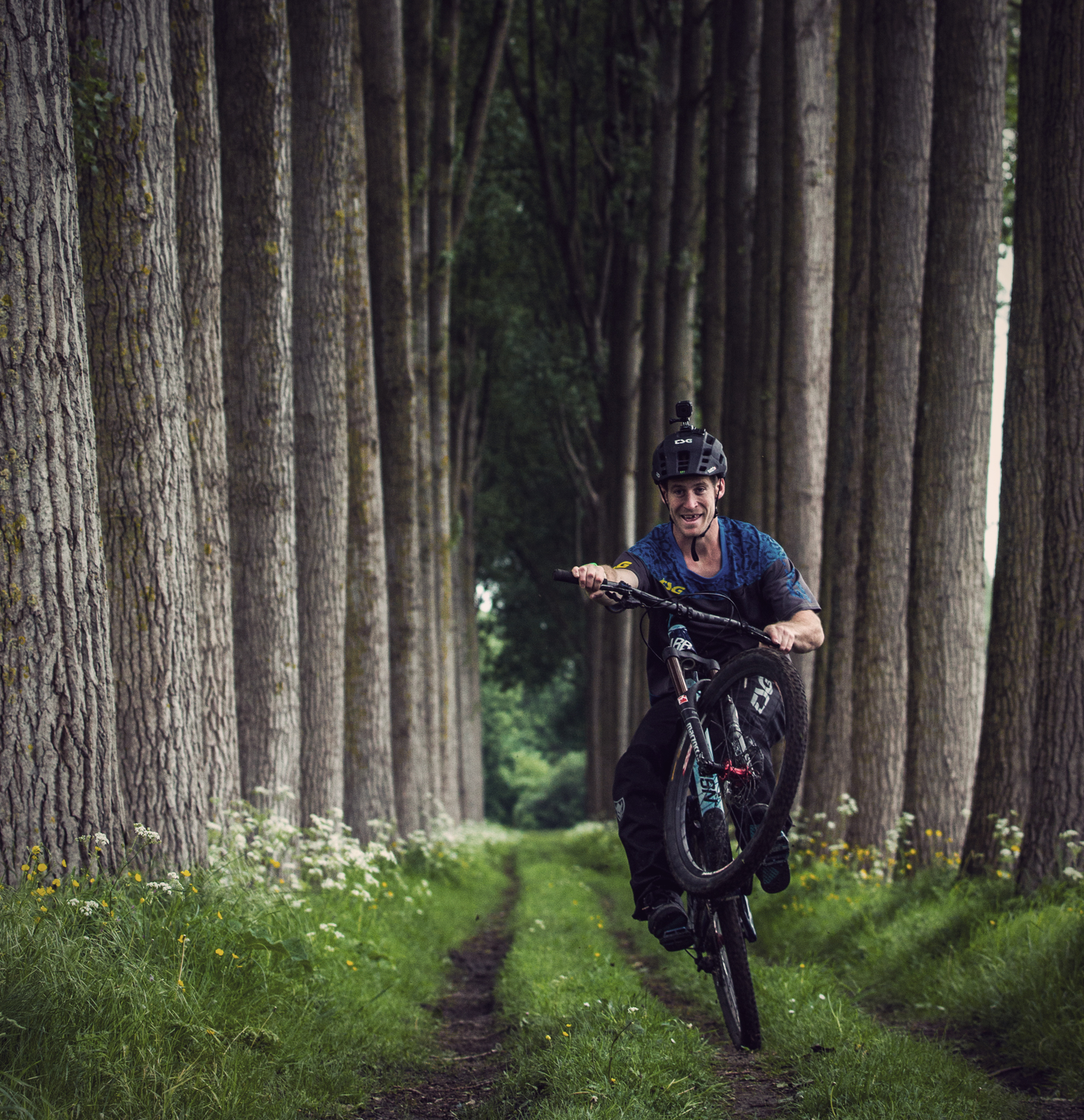 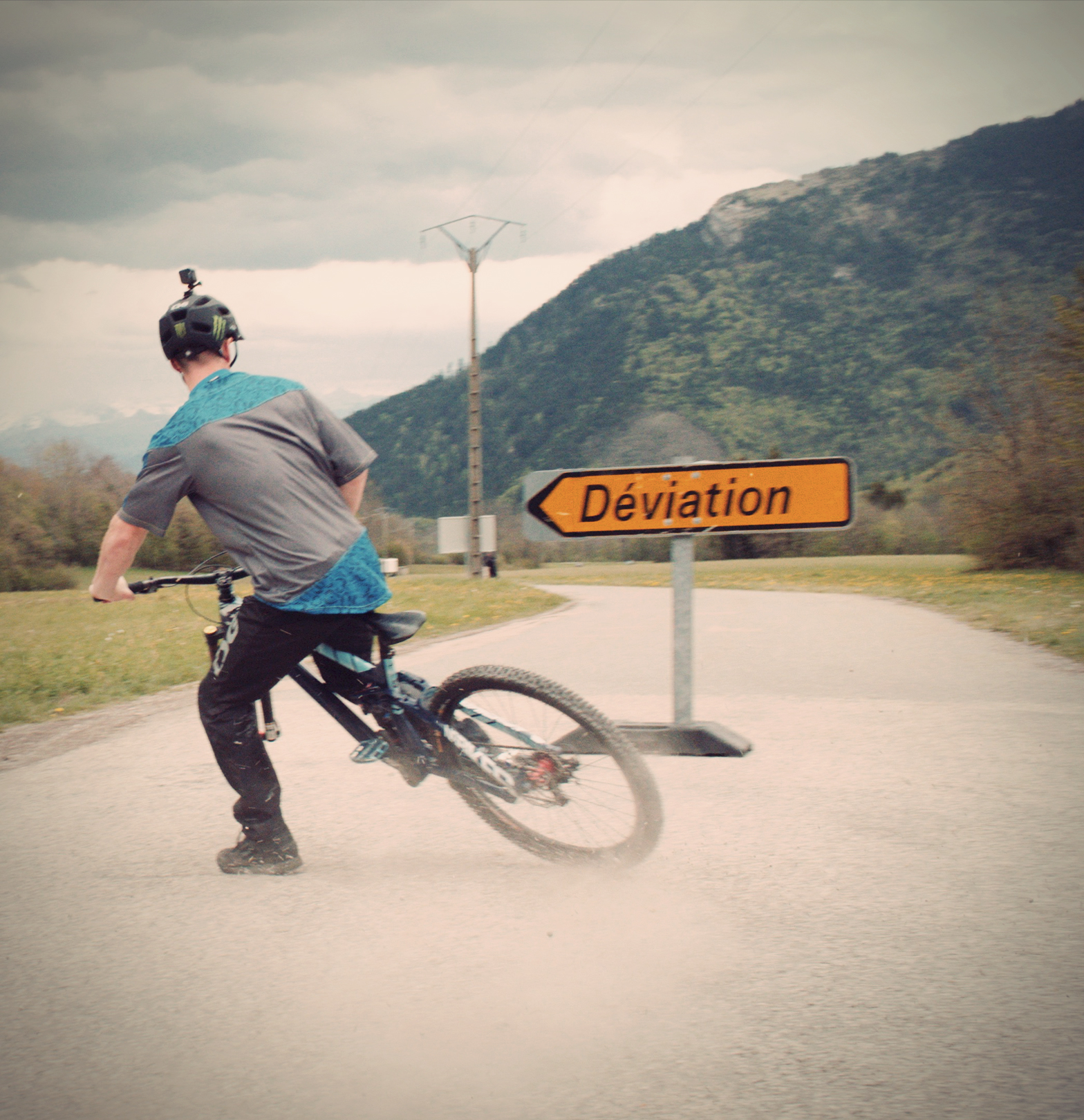 But now it’s about time for the video. Enjoy Sam’s Euro Loop!

Explore the products Sam was using during his trip across Europe