Check out the latest clip “Bang Bang” from TSG team rider and Swiss Olympian Michael Schärer as he blows up the Grindelwald park.

by DANNY BURROWS photos by DAVID BIRRI and VALENTIN MÜLLER

I. The story behind “Bang Bang”

TSG team rider and Swiss Olympian Michael Schärer is no stranger to putting down bangers. But in his latest clip “Bang Bang” he takes this laboured axiom far too literally, adding shock and awe pyrotechnics to a display of pure booter radness.

It wouldn’t get out of my head. I had to do it

We caught up with Michael over breakfast in New Zealand, as he rested up a shoulder injury. Even the best riders fall and injuries like this only highlight the importance of wearing protective gear while riding. Despite being grounded Michael was as ever stoked on life and happy to tell us about what he coined his “explosion session”.

Michael explains that the idea for the “explosion session” was hatched when his buddy Jonas showed him an old video part of Marco Lutz and in Michael’s words “it wouldn’t get out of my head. I had to do it”. 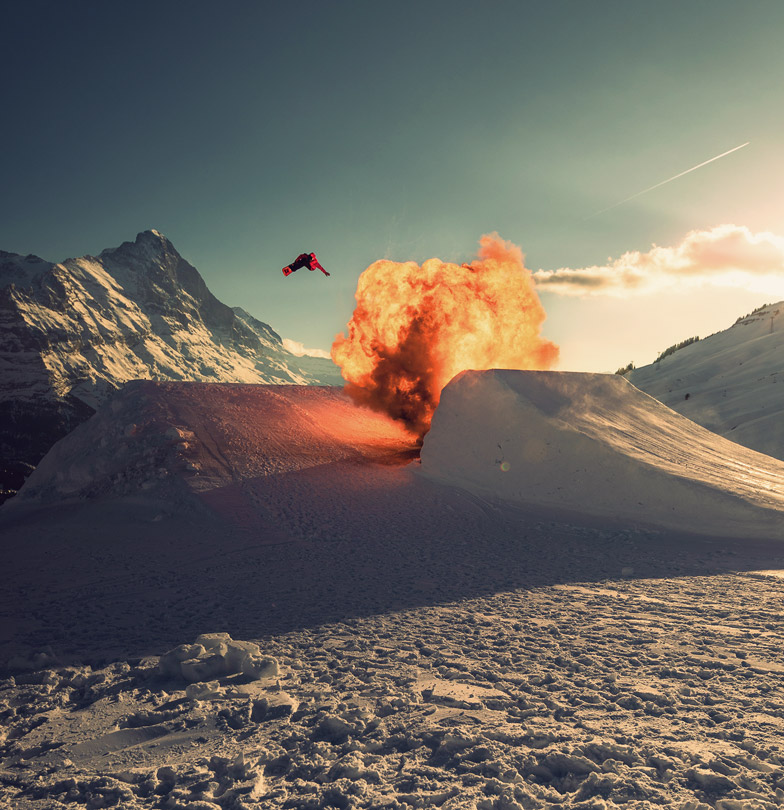 Michael lighting up the sky over the Grindelwald Park 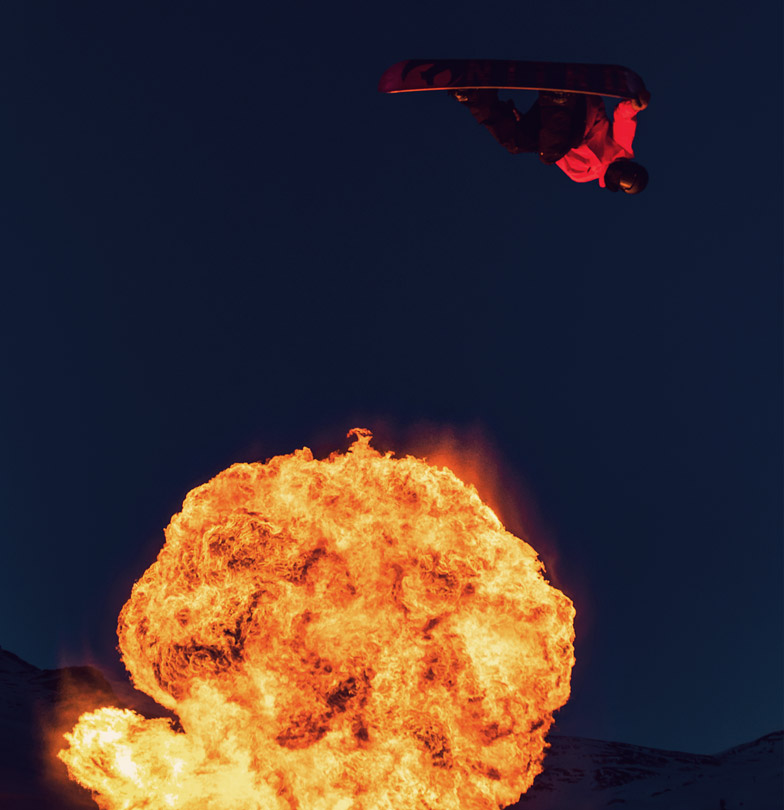 II. How to light up the snow park

Michael approached Gian Simmen from Snowpark Grindelwald and asked if the park would be into the idea, and got a resounding YES! Next he recruited a pyro technician who with the help of a few gallons of gasoline was happy to light up Grindelwald with a few explosions. And, the final piece of the jigsaw was a hook-up through the girlfriend of the Swiss team’s physio with the highly skilled drone filmers Dedicam TV. All the charges were now in place for the mother of all banger sessions.

On a perfect Grindelwald bluebird day Michael had ten jumps with explosions to make the session a success. In his own words he had to “choose between style tricks and video tricks” – in other words bangers that look good on film and stills over difficulty – his favourite being a switch back 9 stalefish and the double tricks with his buddy Ralph Menth. 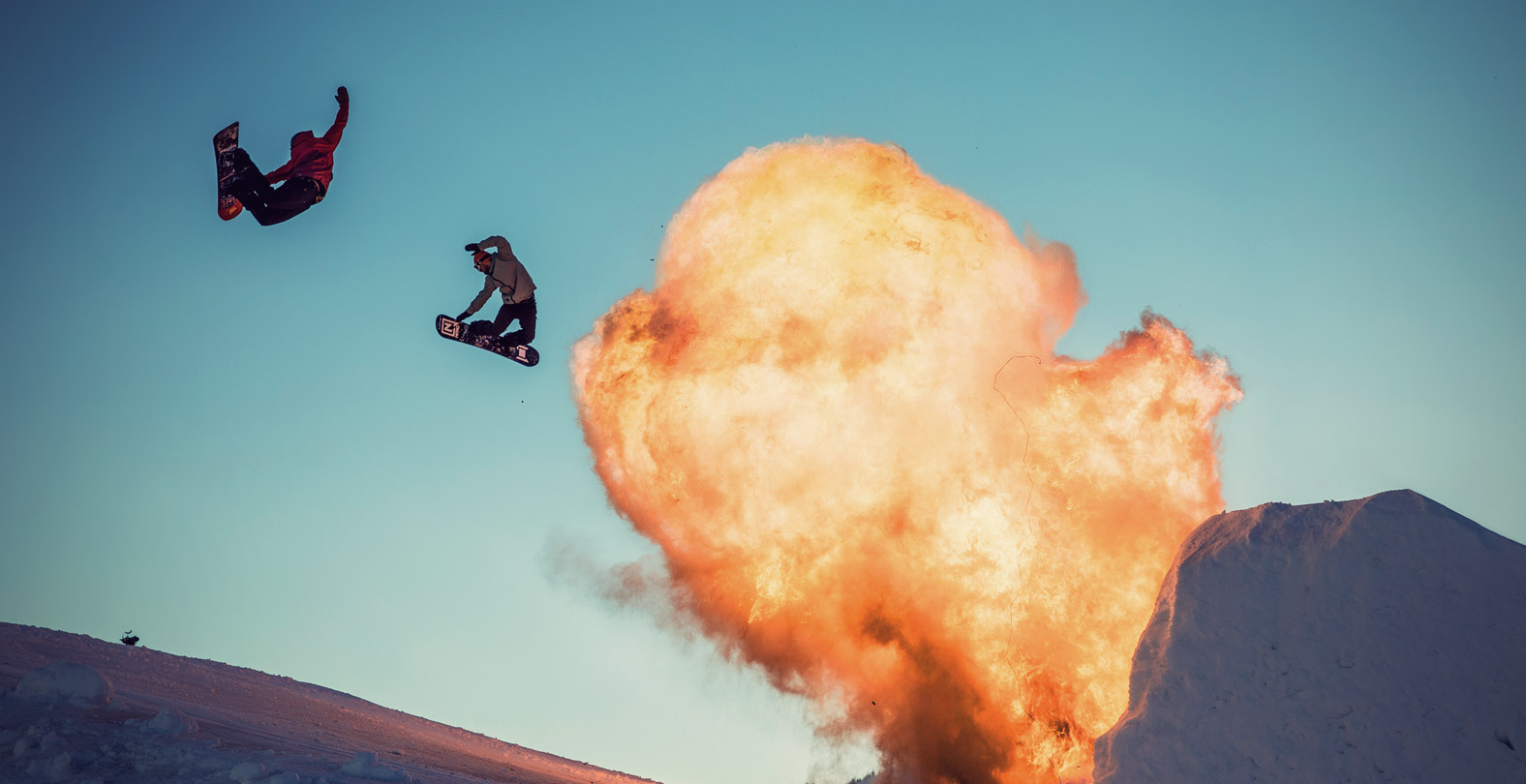 III. TSG has got his back

It is Michael’s precision on kickers – and now slopestyle courses – that has earned himself the nickname “Big Air Mike”. But going big comes with consequences and when something fails in flight-mode TSG has got his back. 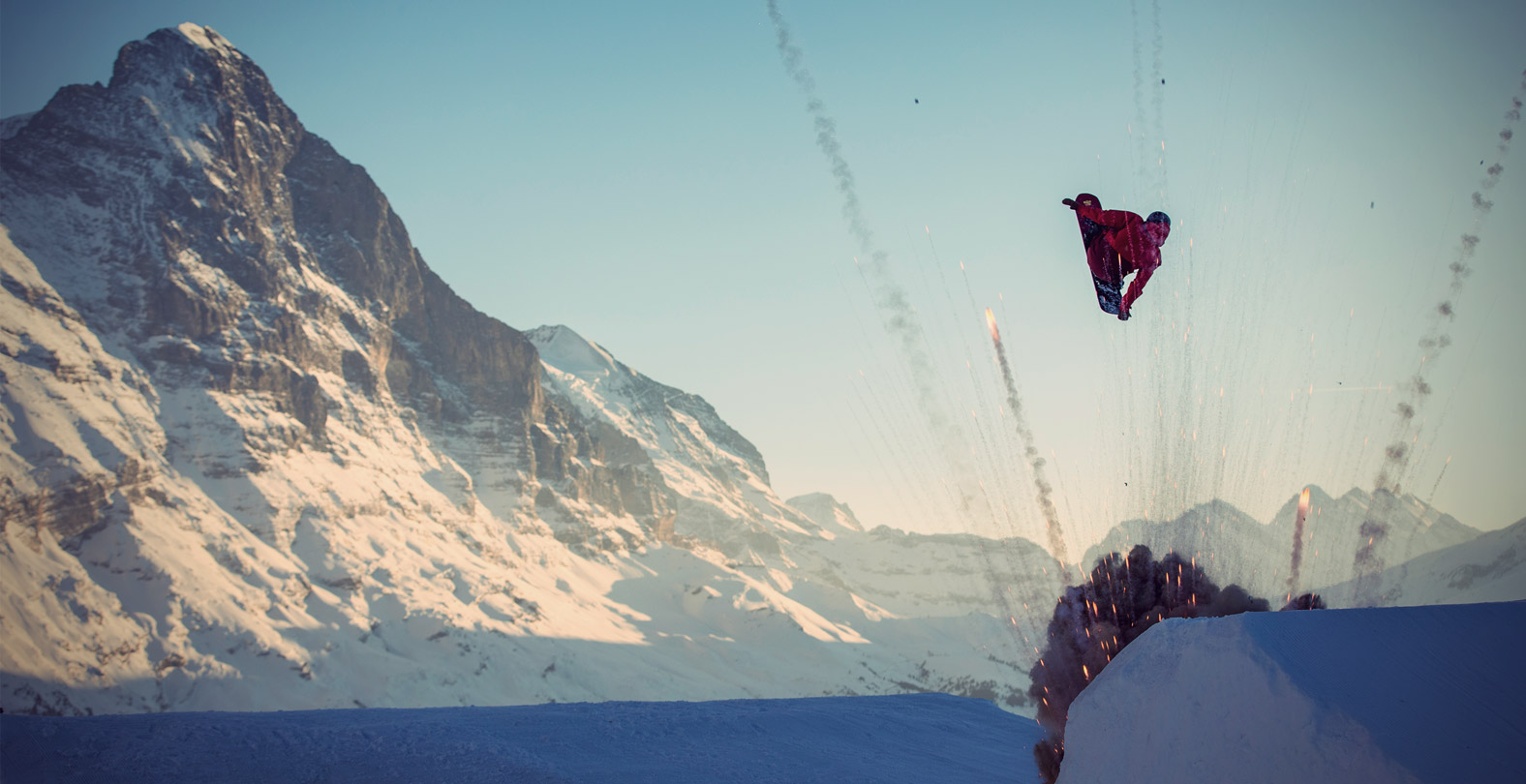 Michael going out with a bang!

Michael protects his head in the skate style, hard shell Gravity Helmet; the reactive, low-profile Backbone Tank A back protector; and a pair of Goggle Amps to guarantee a clear view of the terrain in which he rides.

“90% of the time I ride with a helmet but when I’m chilling I just ride in a beanie” explains Michael. The TSG Gravity Helmet is the slimmest profile riding helmet on the hill and features customizable comfort and fit for the best riding protection.

He may chill without his helmet but Michael never rides without his back protector: “The TSG Backbone Tank A is super comfortable and I don’t feel safe when I’m not wearing it” he explains. “It is not one of those hard ones it is made from 3D and conforms to your back”.

Although Michael says it may be some time before he does another “explosion session” you can catch up with him next winter in Stubai and then on the comp circuit, including Air & Style Beijing. If last season’s victory at Total Fight is anything to go by it promises to be another banger season for our team Swiss team rider and although we can’t protect you against explosions we can certainly keep you safe while riding.

Michael wants to give a shout out to “Snowpark Grindelwald First, Nitro Snowboards, TSG, Hess Moto and Dedicam” for helping to make the dream of the explosion session a reality.