Moon mission accomplished: The Audi Nines MTB 2018 has concluded in spectacular fashion in Birkenfeld, Germany, where for the past week a repurposed stone quarry has hosted a crew of the world’s best mountain bikers including TSG riders Sam Pilgrim, Timo Pritzel, Max Fredriksson, Amir Kabbani, Lukas Schäfer, Tobi Wrobel and Bienve Aguada, on a mission to “Send it to the Moon.”

I. Ruler of the Week

After six days of film shoots and sessions in the moonlike landscape of the quarry, the riders gathered on the evening of Thursday, September 14 to celebrate their successful “moon launch” and decide who would be crowned the champions of the event.

TSG’s Sam Pilgrim was selected for “Ruler of the Week

British mountain bike legend Sam Pilgrim was selected by his peers for the top honor of “Ruler of the Week”.

“The Audi Nines is the best event of the year for me,” states Sam. “You’ve got six days to perform to your highest level. I ended up winning two of the categories, which means a lot because everyone who voted for me, they’re all professional mountain bike riders. I’m stoked about it.” 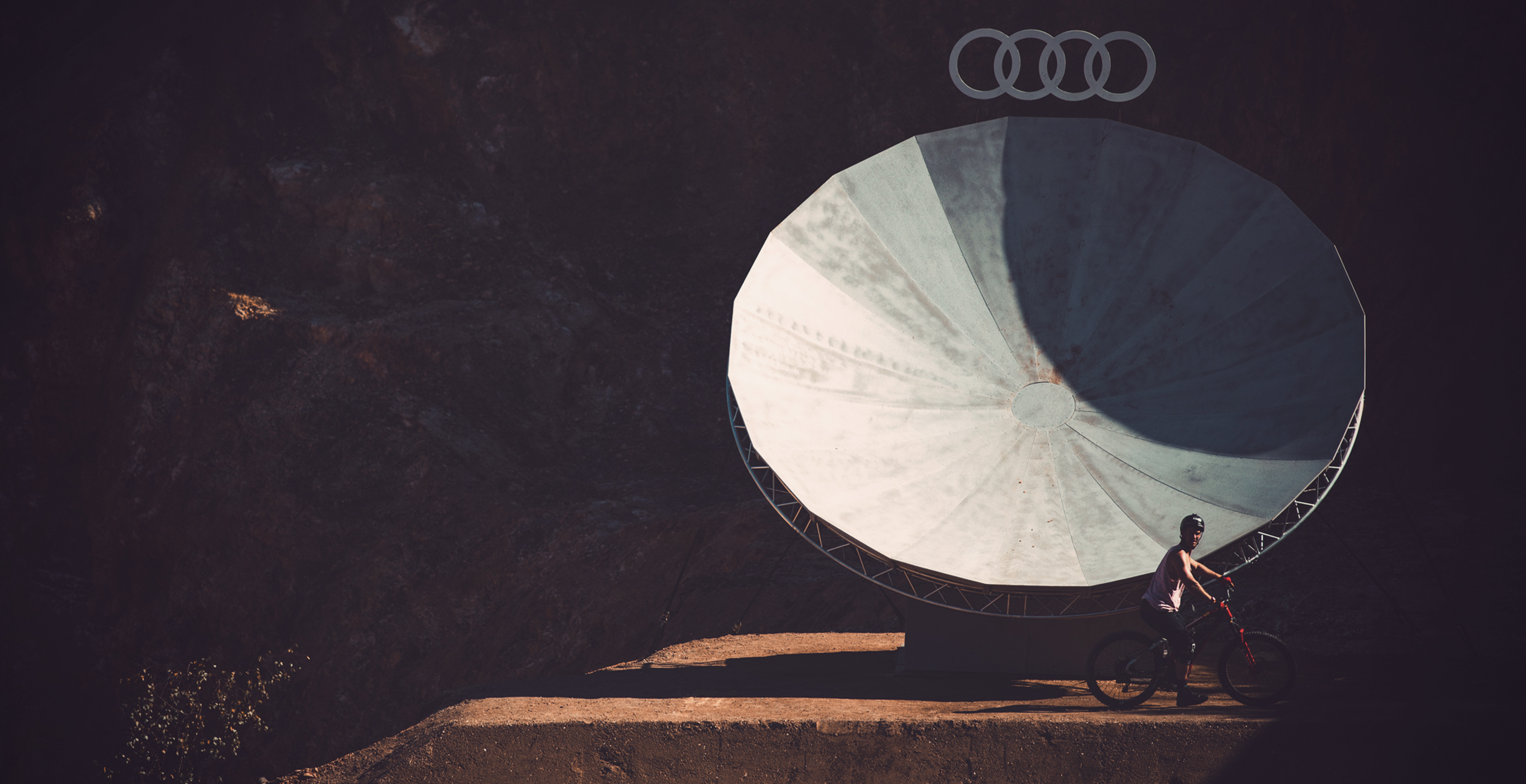 This satellite dish feature was awesome and looked amazing half way down the slopestyle course. Sam is checking it out and seeing what tricks are possible! Photo: Syo Van Vliet

“Somehow I won the slopestyle line. Slopestyle is my thing, you know. That’s how I started, how I got famous in mountain bike riding. In 2011 I won the World Tour. I was the best guy in the world in 2011. Since then, it’s not been the best, but now my friends—and that’s the best thing—my friends have judged me as the best guy here at Audi Nines. That means way more than some random judge judging me. So, thank you very much guys. It’s amazing.”

Sam was joined in the winner’s circle by his countryman Sam Reynolds, whose run through the freeride section was voted “Best Freeride Line.” Winners were also chosen in the category of “Best Freeride Trick”—claimed by Adolf Silva’s incredible Cali Roll, a world’s first on a downhill mountain bike—as well as for “Best Slopestyle Trick,” where Dawid Godziek’s quadruple tail whip—also a first—took top honors. 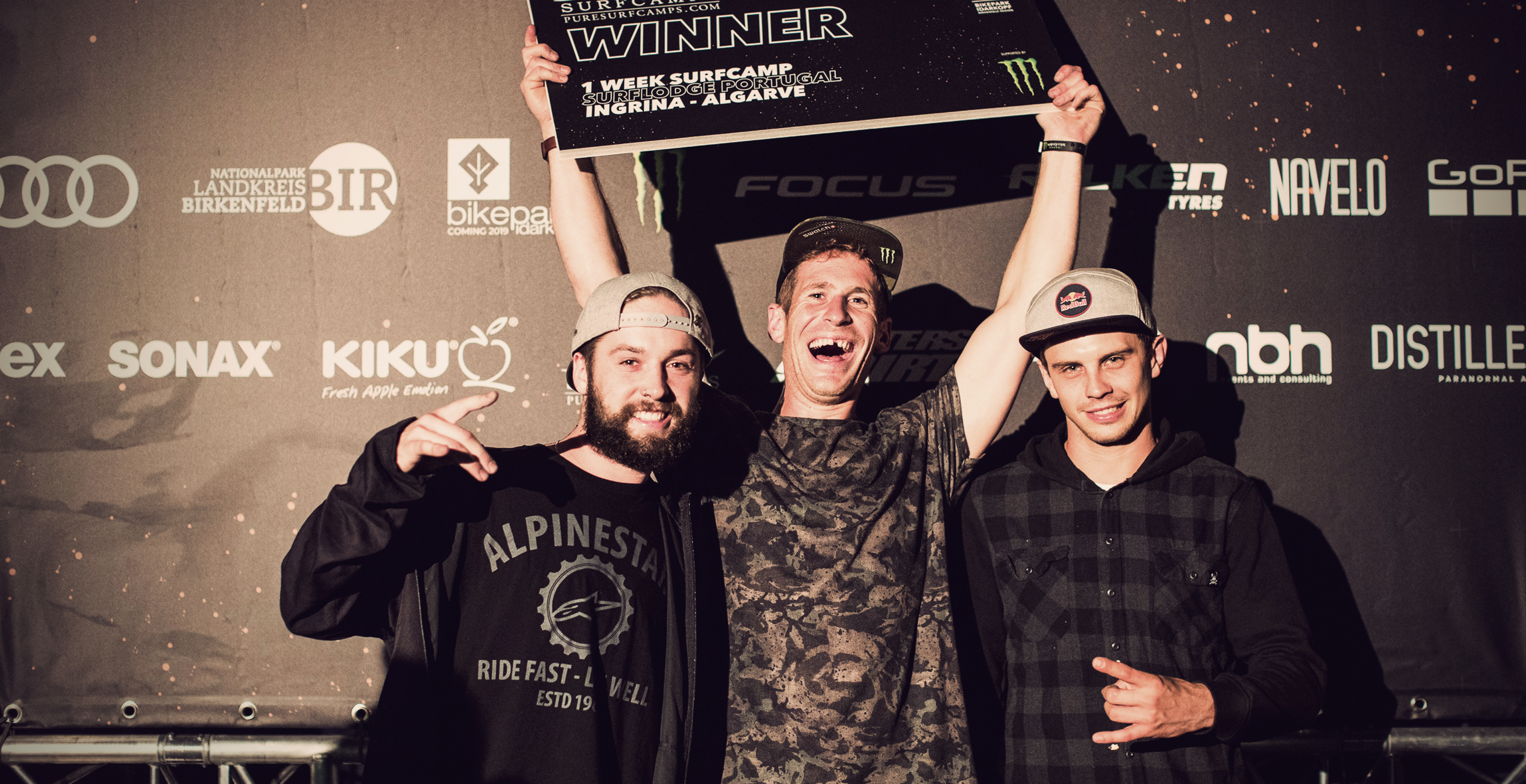 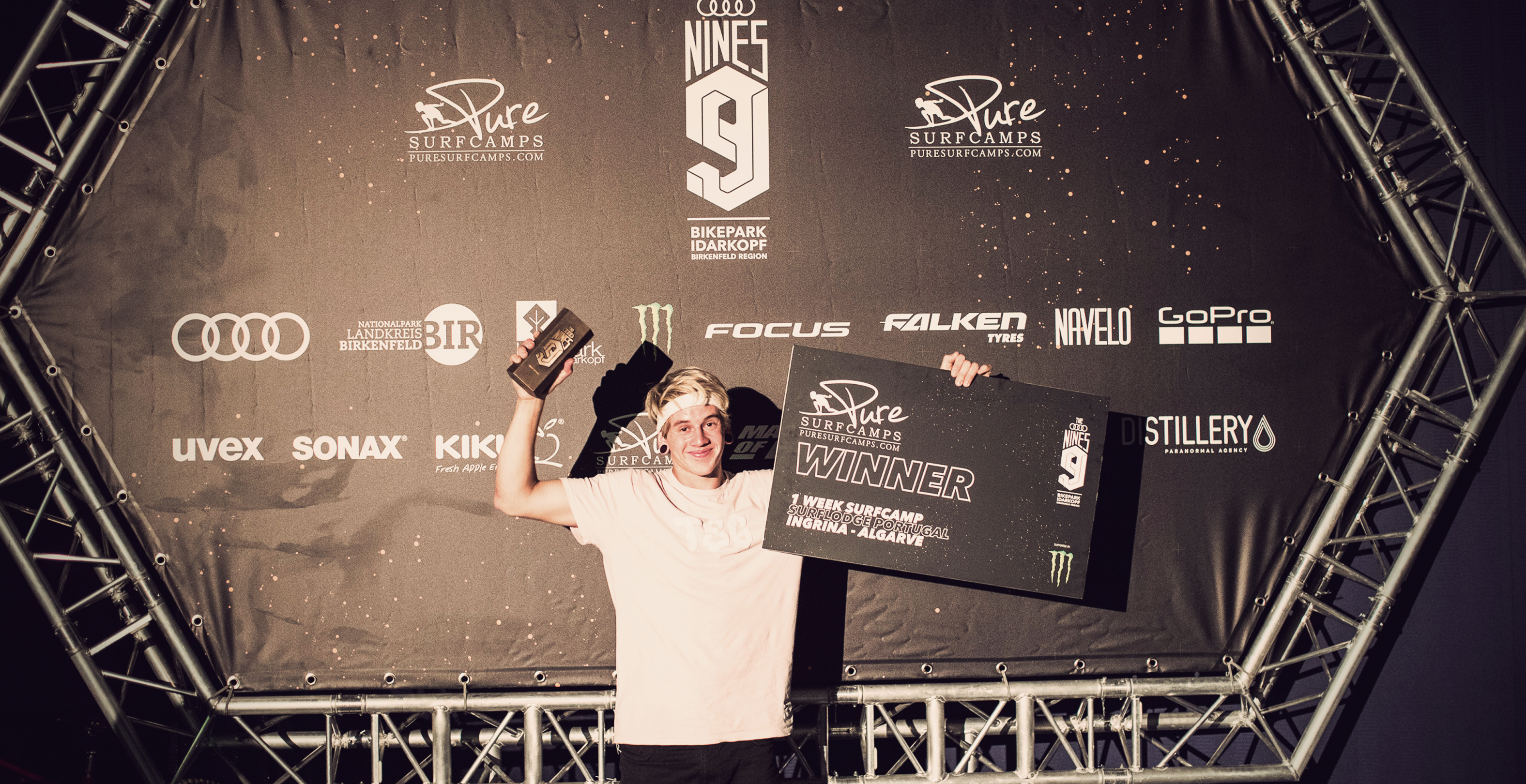 Lukas Schäfer is more than stoked with winning Best Style. At Bike & Style 2018 presented by Audi in Munich he won a wild card for the Audi Nines. Well deserved! Photo: Florian Breitenberger

Sam’s quotes says it all:

“I’m so happy that I got invited to be here. I can’t even believe it. How do you even test such a course? That’s all I was thinking the whole time. It was amazing.”

There’s no rules, you know

“You’ve got six days to perform to your highest level. You’ve also got six days to perform to your lowest level. There’s no rules, you know? The whole idea of the event is to get content, and it stoked me out enough to ride to my highest level, and I ended up winning two of the categories. It means a lot more to win these than to win a FMB event, because everyone watching here voting for me, they’re all professional mountain bike riders. Awesome. I’m stoked about it.” Sam standing on the drop. This drop was awesome and the main reason for this is because it was see through which was crazy! Photo: Syo Van Vliet

We asked our Riders to comment their favourite photos from the event. So it’s now time to enjoy the gallery of TSG riders at the Audi Nines 2018:

Max states that he has spent a legendary week of bangers and good times at Audi Nines. An event that all riders love, it’s basically just a week of riding together and shooting cool content while pushing our limits on the bikes.

They were really taking it to the next level 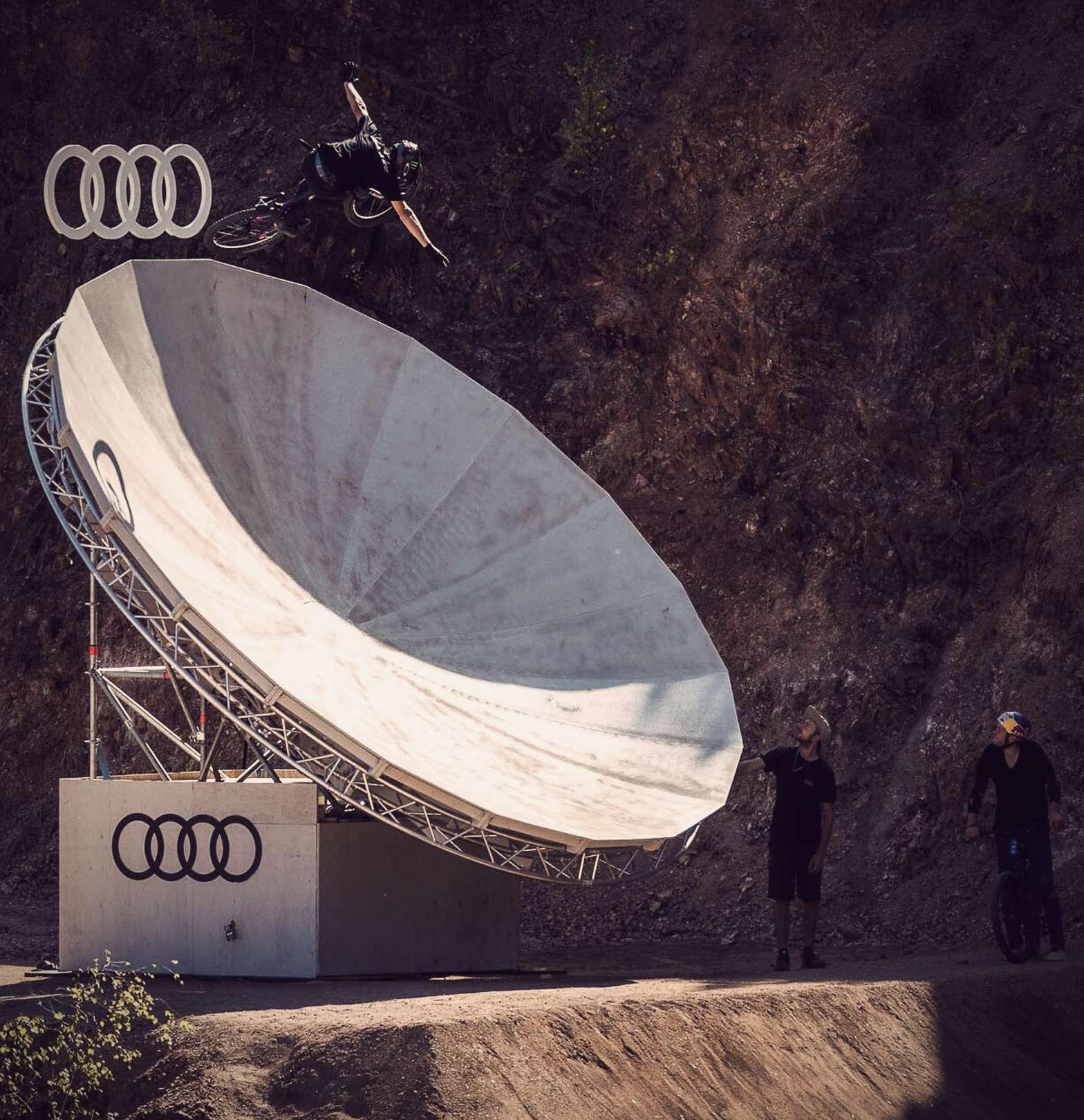 The jumps they built up for this years location was something else. They were really taking it to the next level. The slopestyle course was filled with creative features. This satellite dish was one of my favourites since it was such a technical feature and the possibilities were endless. 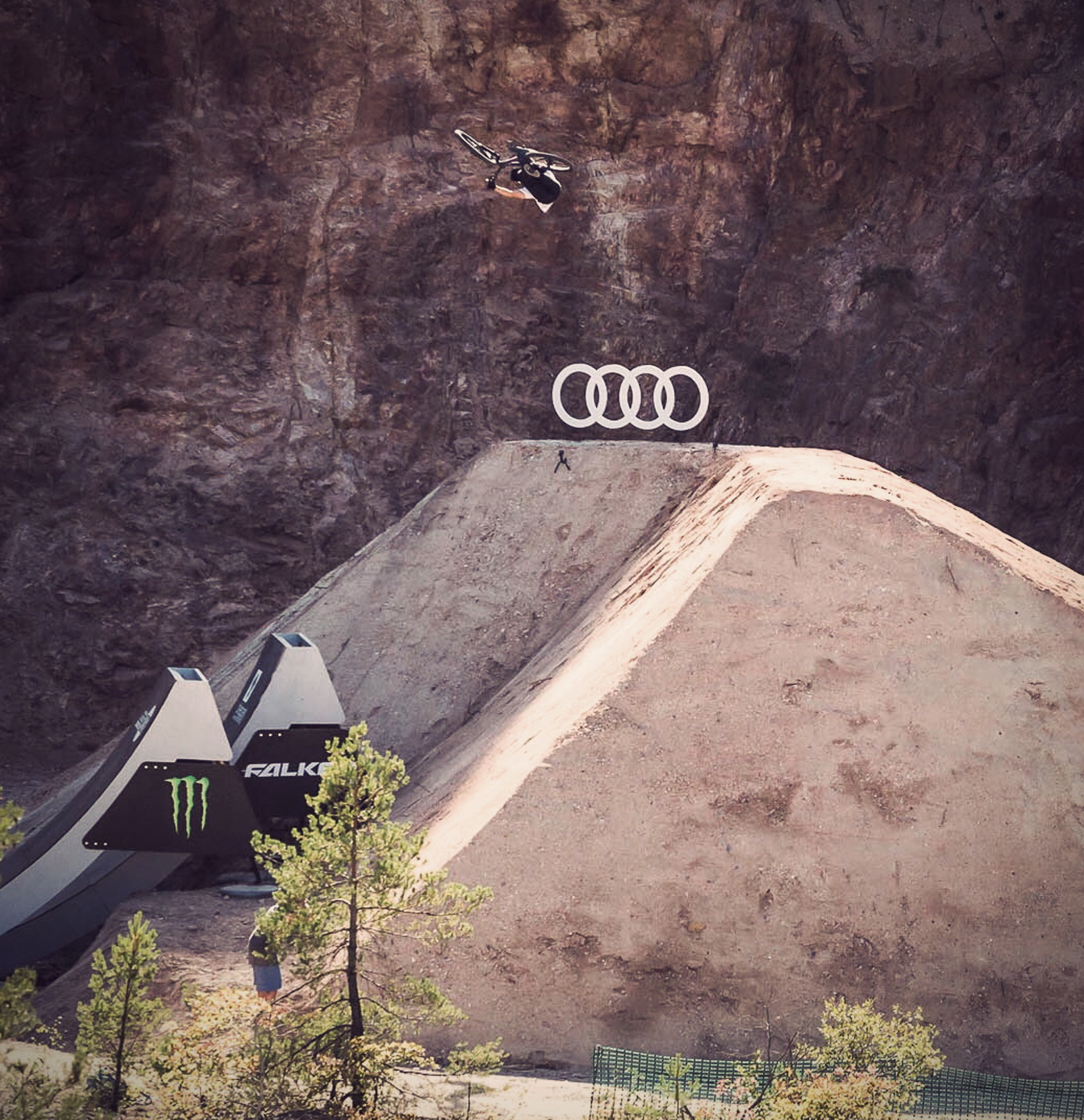 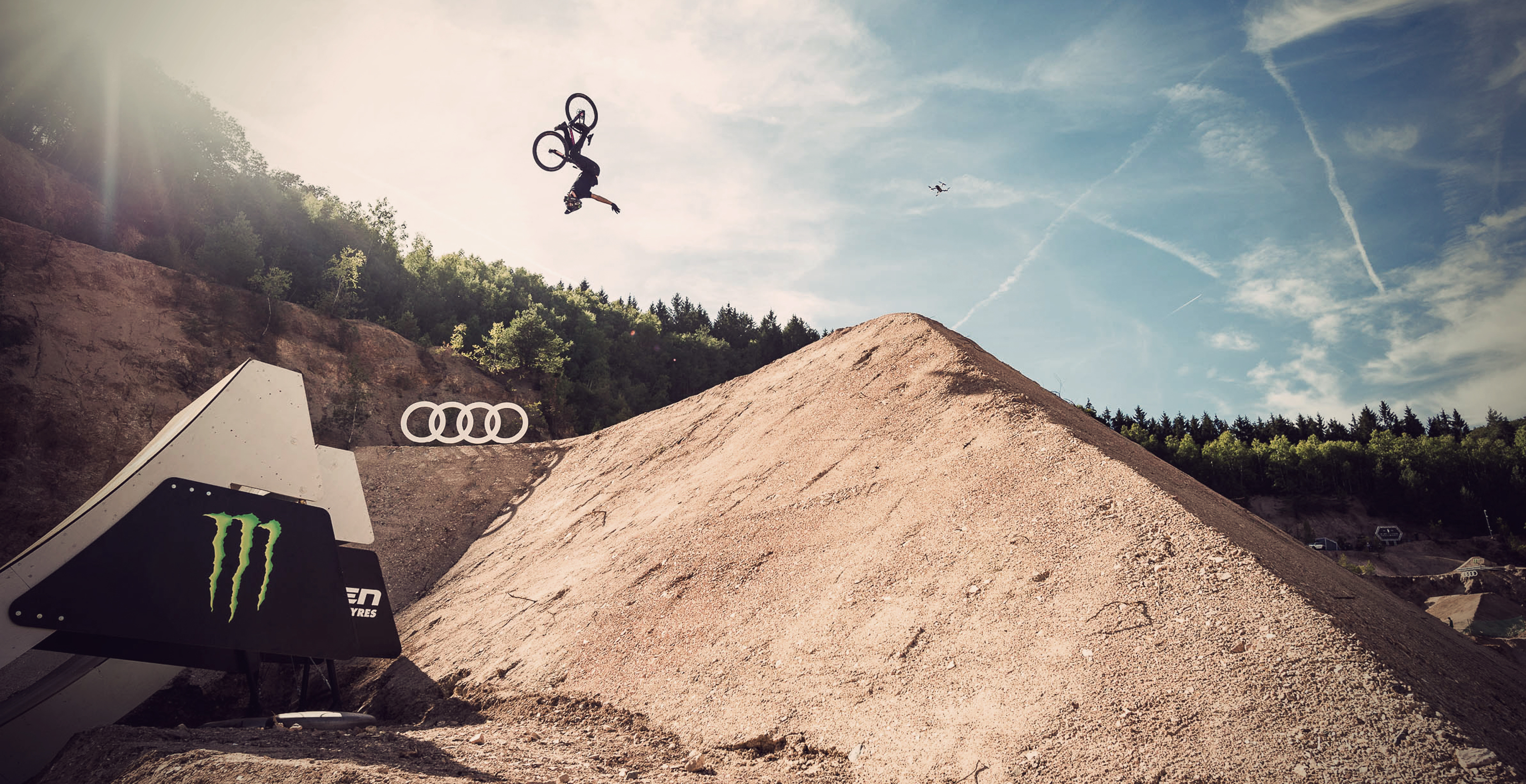 The “big air jumps” were probably the best jumps I’ve ever ridden. When the “small” jump has an 11m gap you know that you’re hitting some big jumps! Photo: Klaus Polzer

Want to know more about Max? Click to visit his rider profile here!

For our german ambassador Lukas the Audi Nines were just unreal. He won a wild card at an event sponsored by Audi earlier this season and boom ended up to win “Best Style”. 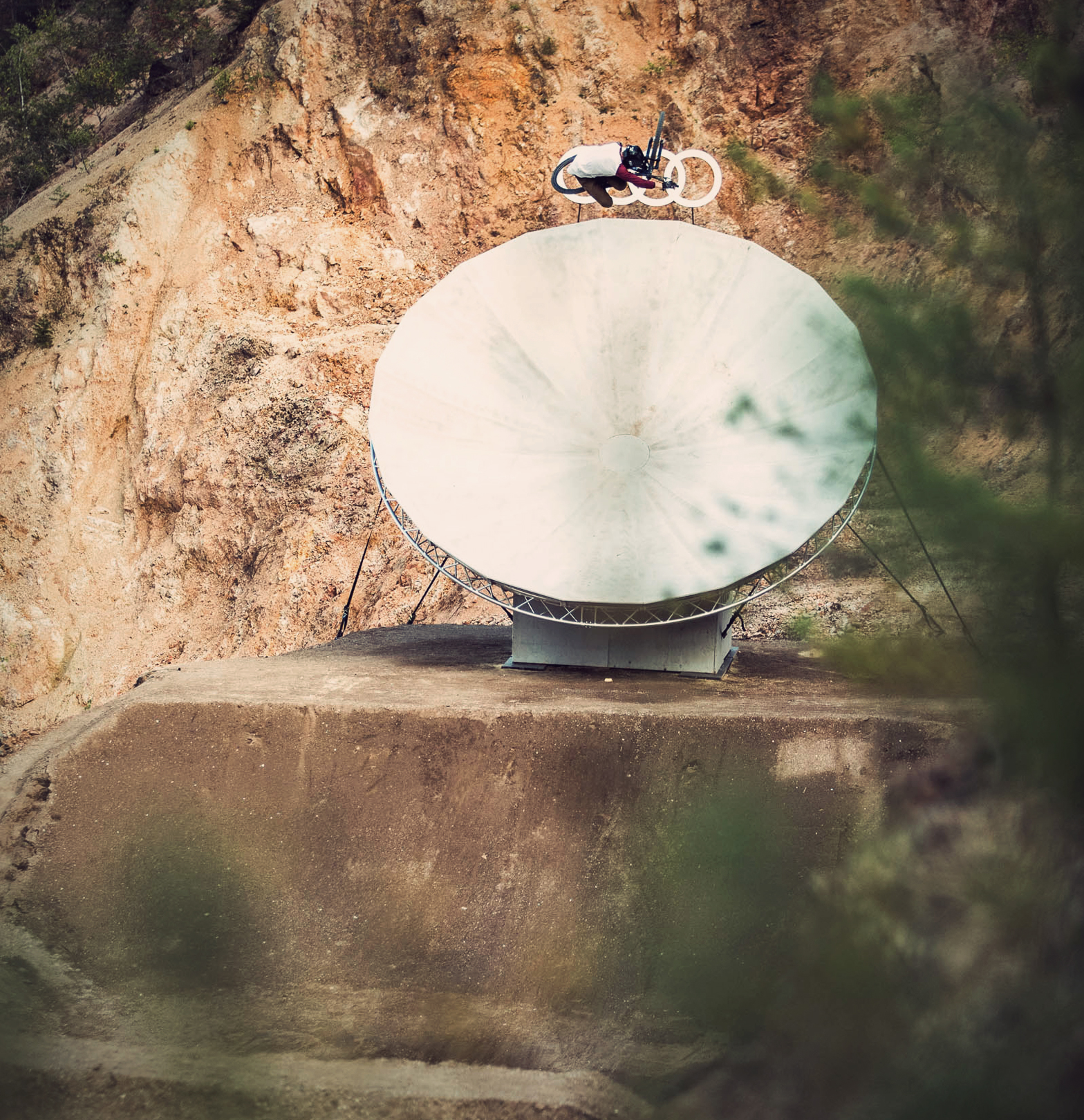 These shots got taken at the first day. After the first couple runs, I already felt in love with the jumps, they were just insane. The Satellite-dish was definitely an obstacle I’ve been pumped for. Not really for big missions but to have fun with for sure. A feature you won’t find anywhere else. Photo left: F. Breitenberger. Photo right: Klaus Polzer 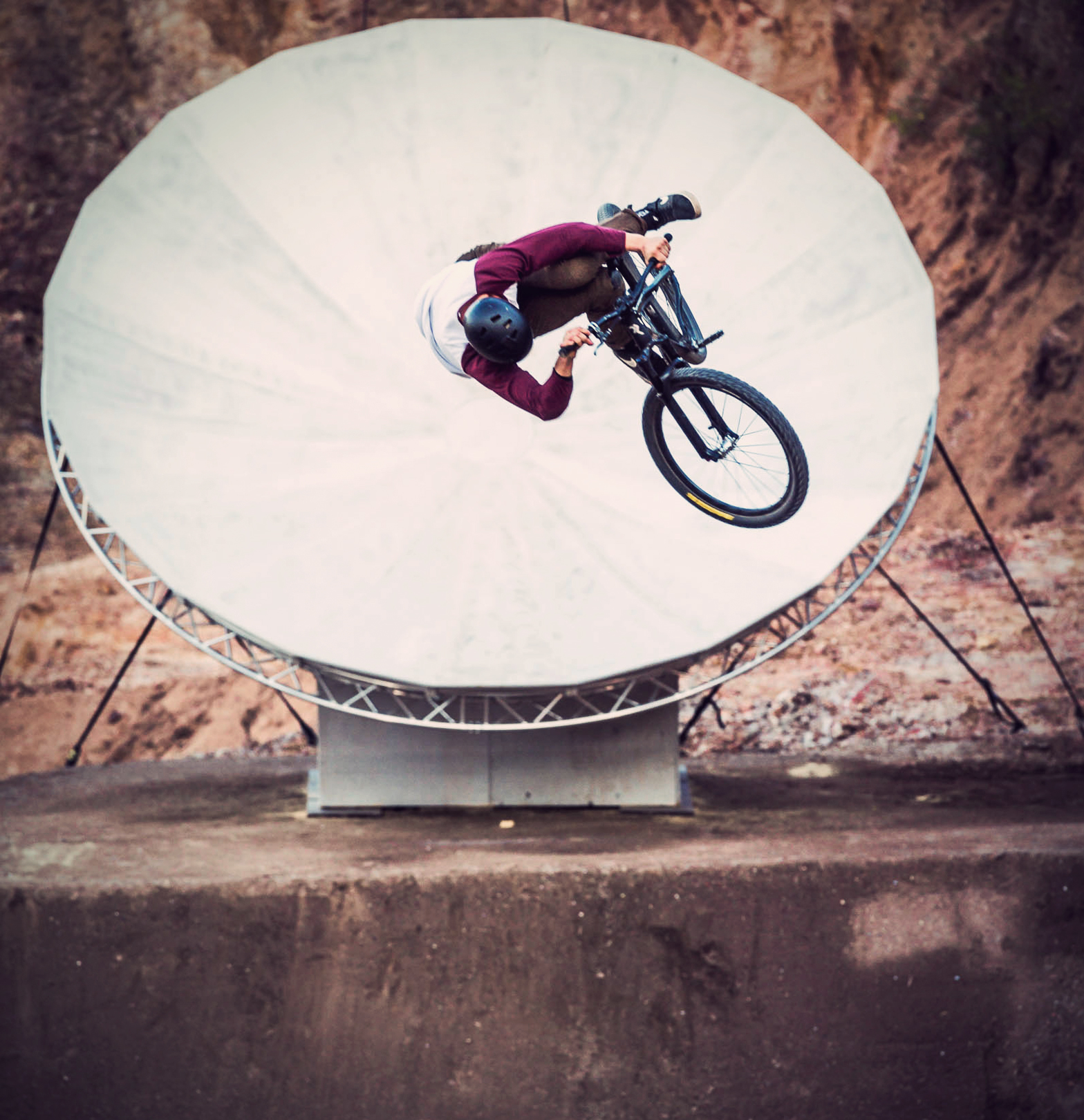 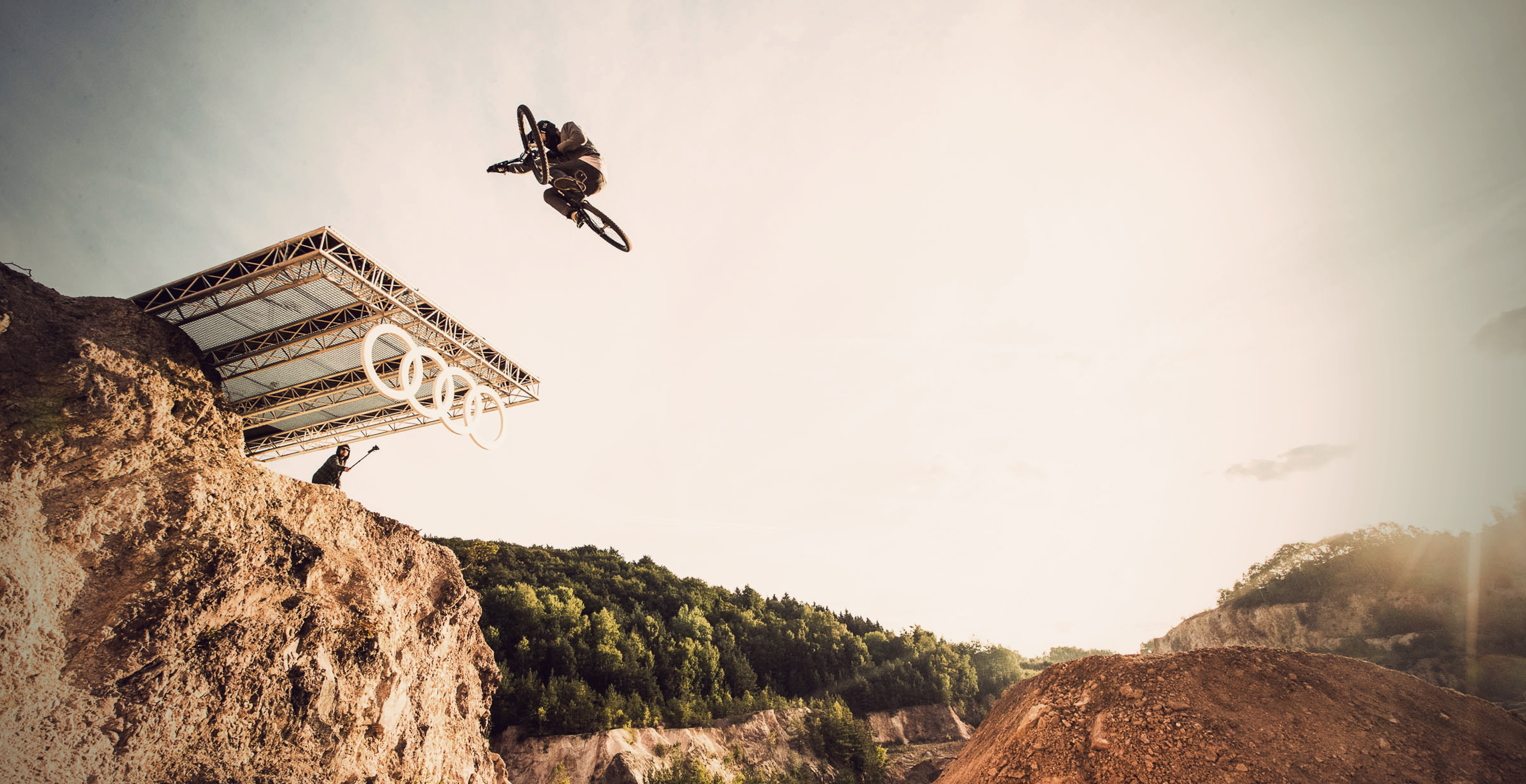 The Skyfall Flatdrop was also one of my favourites. I was pretty excited to ride it, but also nervous because I don’t ride Flatdrops often. Luckily i got used to it pretty fast and already learned some new stuff in the second morning. Photo: Florian Breitenberger This shot was taken at the shoot for Christoph Laues Illumination Submission. Two Audi shuttles drove in front of the jumps and produced the dust. That was really fun! Photo: Klaus Polzer

For Sam it was the best mountain bike event of the year and he is super stoked to be selected as the ruler of the week and also to have won the slopestyle line. Here I am doing a flat drop backflip off the see-through drop. This was fun! Photo: Klaus Polzer 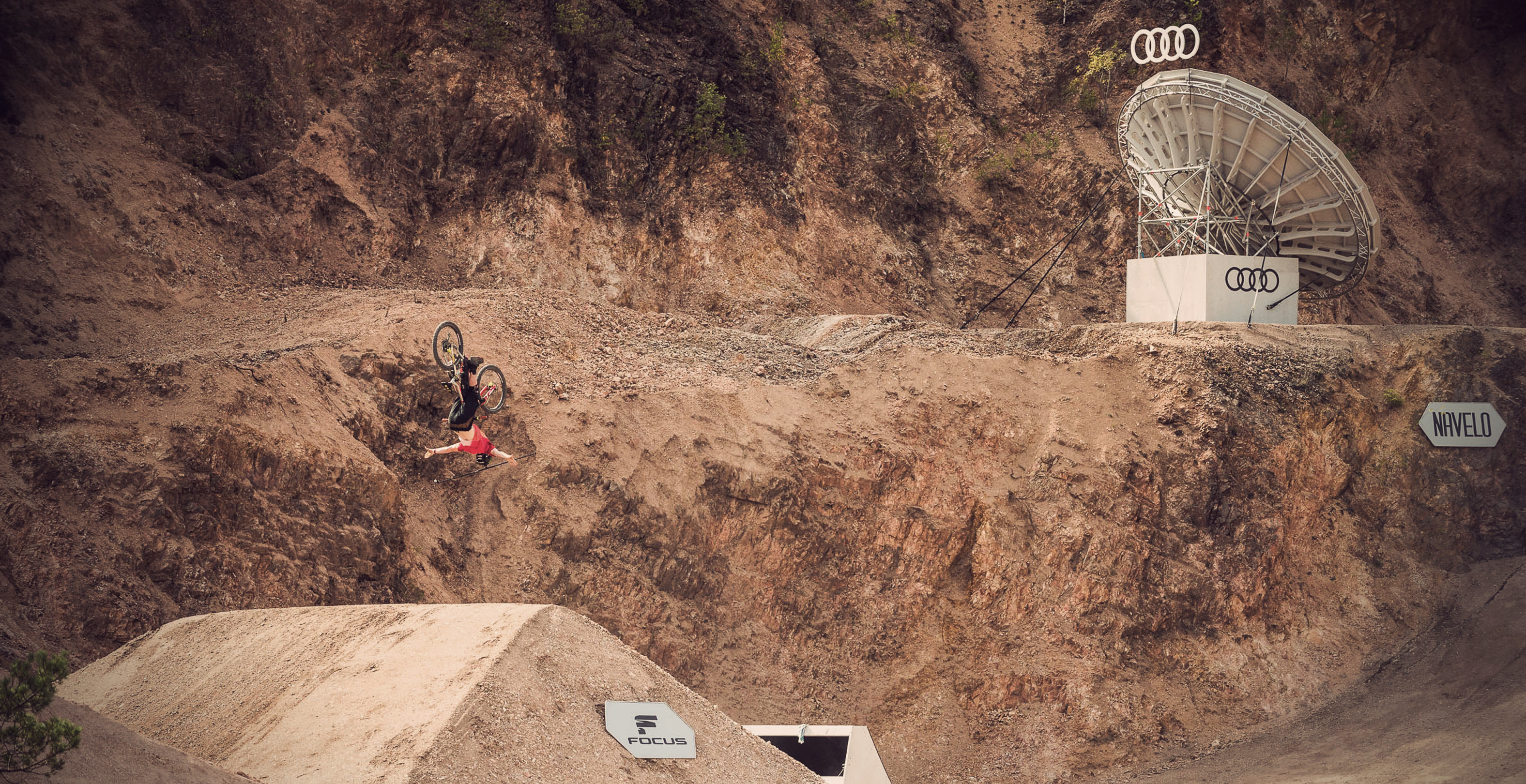 Flip no hander! I kind of think of this trick as my signature trick because I’ve been doing them forever and they are so easy for me now. But I love how they look!! Photo: Klaus Polzer

Sam has been on the TSG team for a very long time. Visit his profile page by clicking here.

When I finished my session on the other lines and saw that there was another trick session going on at the Big Air Kicker, I decided to join in. I did the jump a couple of times the day before and knew how it was going and so I only did two jumps before I decided to go for this Superman.

I left the takeoff, got off the pedals and stretched out. At the same time this 10m Superkicker pushed me unexpectedly higher and higher and my bike further and further away from my body, so I thought – ok, you won’t come back. In the end it worked out and the screams, as well as the video afterwards and the high fives of the riders showed me that it was probably one of the most extreme things so far. 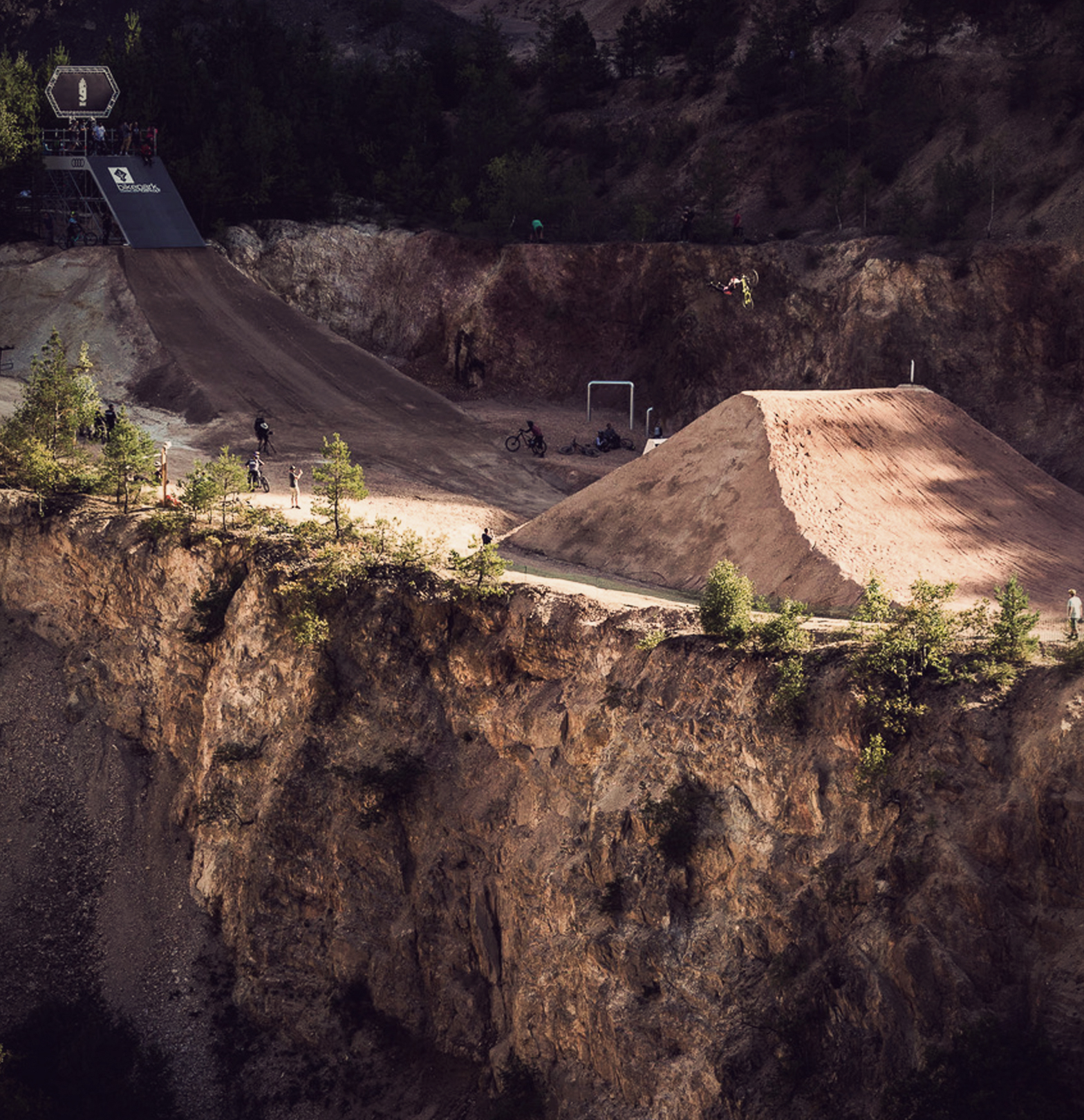 Left: Probably the fattest Superman I’ve ever made and at the same time one of the worst I’ve felt. Photo: Klaus Polzer. Right: This 18m left hip made me smile every time, even though I had a slightly dull stomach every time I dropped into the line. Nevertheless it was one of the hottest features in the Quarry and I just couldn’t stop riding the Freeride Line. The airtime and the flow you could put in there infected everyone. Photo: Florian Breitenberger 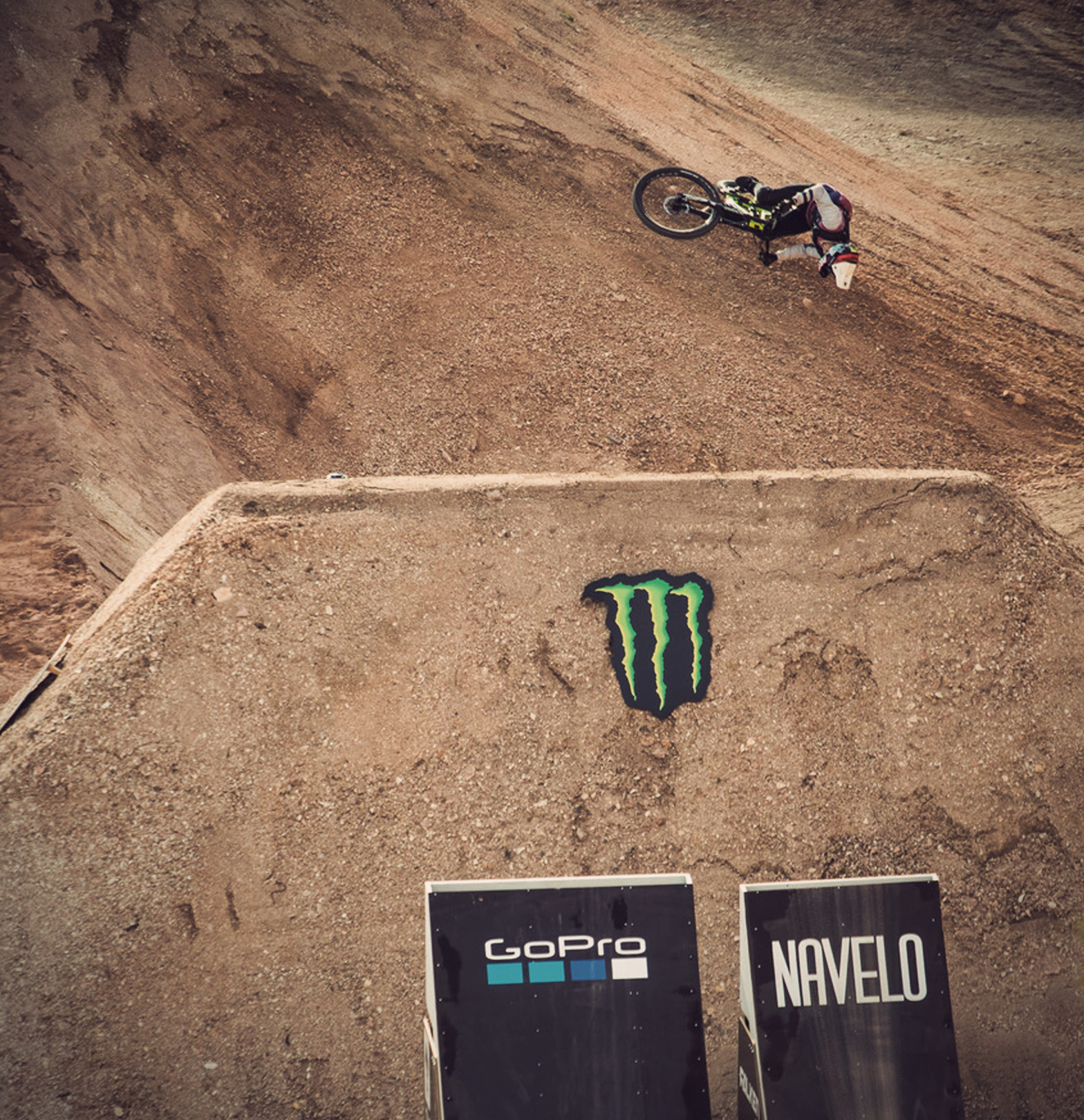 My first flatspin with a downhill bike at the last kicker of the slopestyle line (10m). As you know, trying it is about studying and so I just tried it and I think it not to bad. Photo: Florian Breitenberger

Tobi is in our ambassador team and we have just released his rider page. Check it out here.

TSG ambassador Bienve has been nominated for 4 categories at the Audi Nines Gala Night. He got third at Best Freeride Trick. This picture was taken with a gopro fusion. I am doing a frontflip with the dh bike at the slopestyle line with a long mount that was on my back. 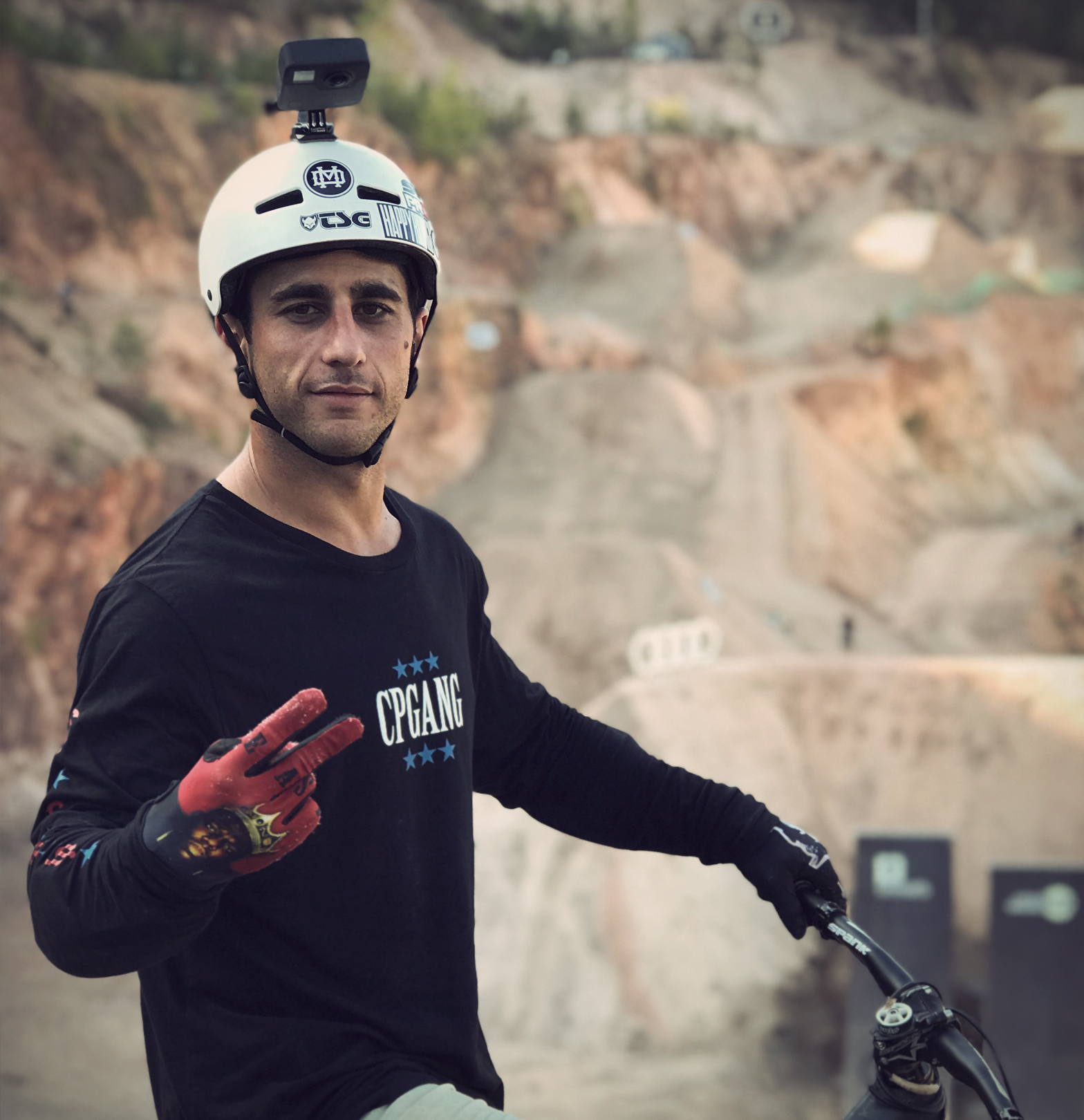 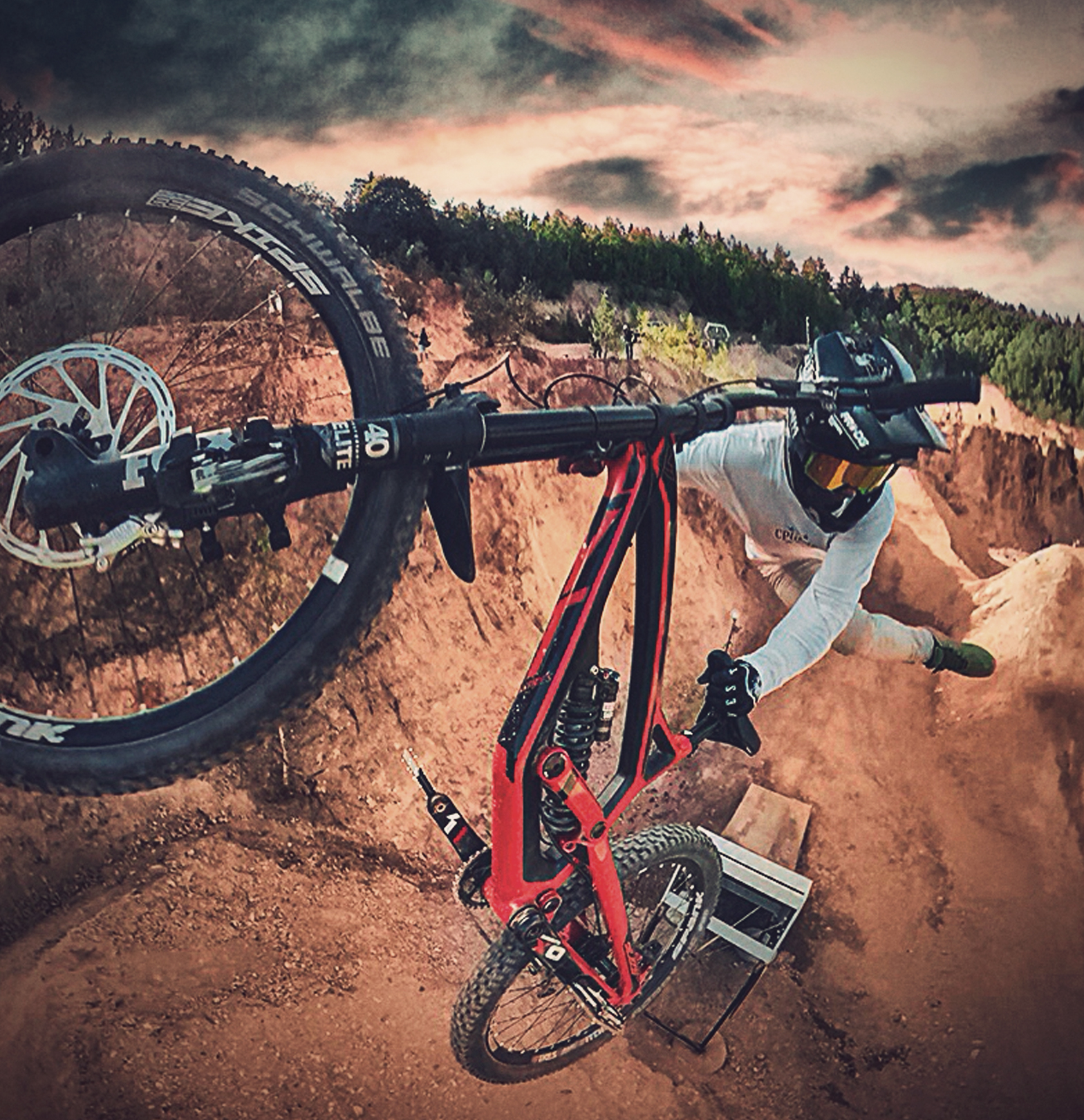 On the left photo I do a superman seatgrab with the dh bike in the big air. Photo by Flo Preuss. The left pic is another go pro fusion photo with a mount on the fork.

Also for Amir the Audi Nines was one of his favourite events ever. The ultimate format with a pretty much one-week jam on the sickest set up caused some unforgettable memories.

I had so much fun just riding and collecting air miles

He was super happy to be part of  it, even though he had to leave earlier because of a wedding invite. 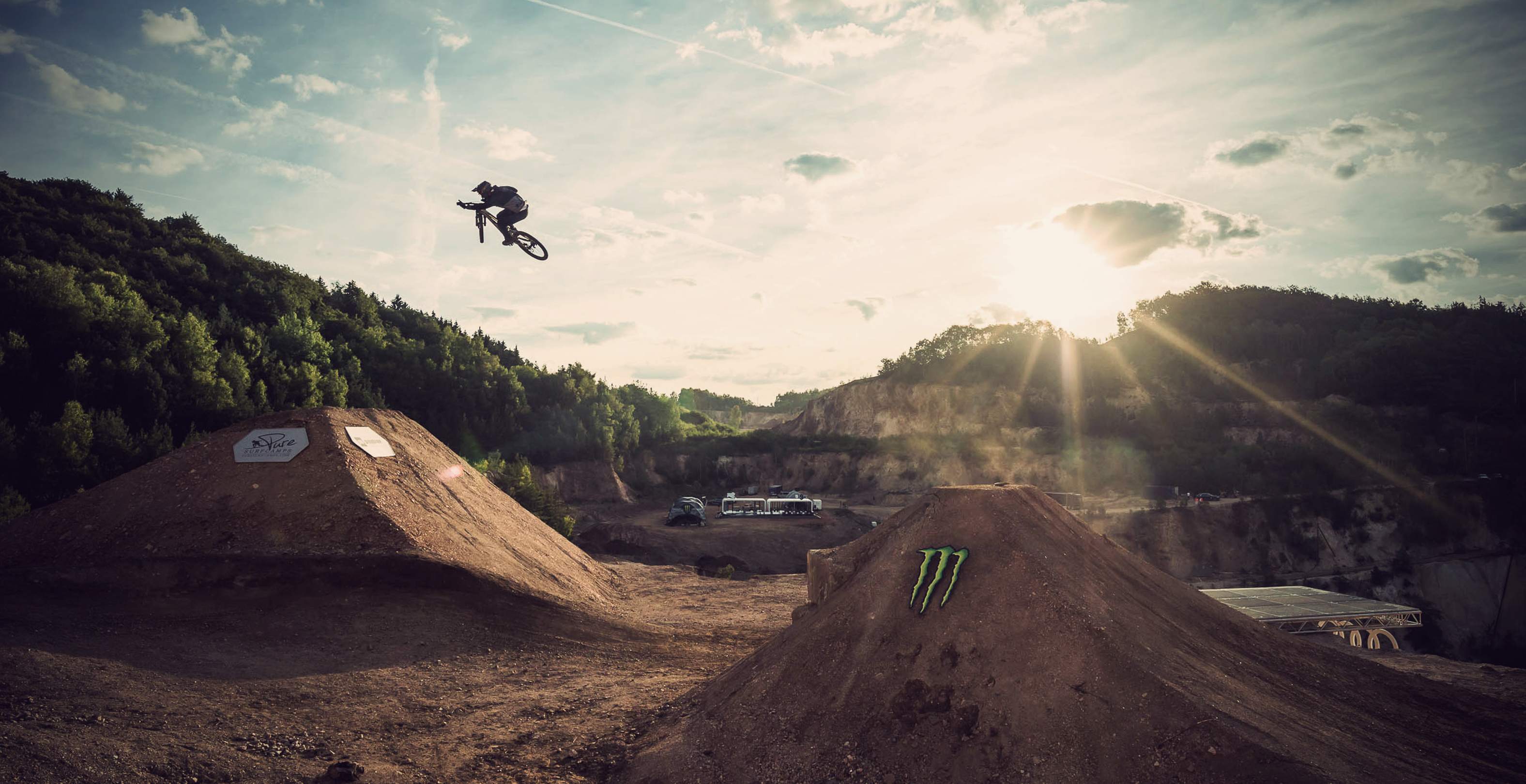 Early morning on the hip was one of my favs. Couldn’t get enough of this airtime. It surely took me some days to get used to the compression of those jumps. But once I felt it, I started tricking them The Freeride Line started with this drop. Hitting those drops and Jumps with so much speed was something else. Table topping over the big boy on the right pic! Amir rides head-to-ankle with TSG. Check out his rider profile and look at the products he uses most here.

Timo couldn’t stop saying how good it felt to ride at such an amazing location for a week and have high quality footage from the best filmers and photographers . He shouts BIG props to the building crew ! That’s a piece of art to build a course like that ! BIG jumps that work and are still save and fun! Happy to be able to be still jumping those big lines with the young boys! Funny but i am Just learning how to use a GoPro camera properly … I guess I am old school, Haha. So after these nice shots I am motivated to use this little thing more and produce more own content. And what would be a bike event with Timo without him teaching yoga! The best balance for the young and wild. Photo: Florian Breitenberger

Timo is a true legend of the dirt and freeride scene and is one of the most experienced riders ever. Besides biking he finds his balance with yoga and a healthy diet. Have you seen Timo’s rider’s page yet?

And now enjoy the contest highlights: